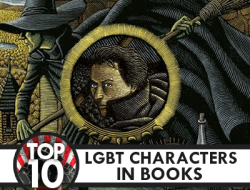 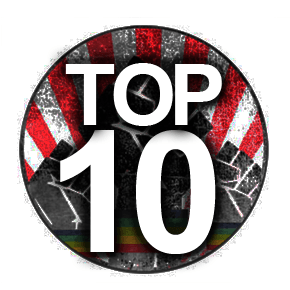 What goes into making a Top 10 List of the best LGBT book characters?  Plenty of you are probably surprised that we didn’t include Dumbledore (as well as plenty of other notable LGBT characters like Dorian Grey, Lisbeth Salander, Stephen Gordon, or Tom Ripley) on our list.  There’s a very fundamental reason behind our choices.  We Gay Nerds feel that we deserve strong LGBT characters whose sexuality is acknowledged before all entries in a best-selling book series have been published.  There’s a fundamental difference between fully fleshed out characters whose sexuality plays an important role in their lives and characters who are made to fill a gay role.  We, the LGBT population, aren’t something to be buried in subtext or alluded to after the fact.  Yes, we are all more than just our sexuality and we have plenty of defining characteristics that make up who we truly are, but who we love is a basic building block of our composition and we deserve to be acknowledged in a more welcoming light.

But why not Dumbledore?  He’s a strong, compelling character, someone who’s seemingly perfect for a list written by Gay Nerds.  Honestly, though, Dumbledore hasn’t earned a place on a list of the Top 10 LGBT Book characters.  Everyone who we included used their LGBT identity in some fashion on their path to self-fulfillment.  Dumbledore being gay is nothing more than a footnote in his own story.  If we allow ourselves to read into the subtext presented, young Dumbledore had a very brief and passionate relationship with another wizard his age and then, scared by the consequences of the territory which the two of them explored, vowed that he would never love again.  No other relationship is ever mentioned and he spent the rest of his life alone.  We deserve more and that’s why we chose to showcase the strong, proud, brave LGBT characters that we did.  Now, for our list… The next time you're looking for something to read, keep our Top 10 LGBT Book Character list in mind!

#10 – Sam Clay: The Amazing Adventures of Kavalier and Clay

Michael Chabon’s novel, The Amazing Adventures of Kavalier and Clay, pretty much has it all.  You’ll find love, sex, death, comic books, harrowing escapes, comedy, and much, much more within this historically rich tale.  On top of being a great read, it’s gotten quite a bit of critical acclaim in the 11 years since it’s been released, including being the winner of the 2001 Pulitzer Prize for Fiction.  There are hundreds of great elements which really make this book special, but one of the ways in which it particularly stands out comes through its treatment of one particular character, Sam Clay.

The beginning of Tipping the Velvet finds our protagonist, Nancy Astley, living as a naïve oyster girl in her family’s restaurant.  She seems resigned to what appears to be the inevitable fate of all young women—marriage and children—until she attends a performance featuring the male impersonator, Kitty Butler. Just seeing Kitty on stage awakens something in Nancy, and she soon finds herself falling in love with the older woman. In time, the two become lovers and then partners with Nancy performing in drag along side Kitty and adopting the stage name Nan King. Both classic and contemporary books have some outstanding LGBT characters to enjoy!

Great Britain, in the period leading to the First World War, wasn’t an especially inviting place for homosexuals.  Even though E.M. Forster wrote and set his novel Maurice during this era, it wasn’t published until after his death in 1971, due to the controversy this novel presented.  Forster, himself a largely closeted gay man, wrote this novel after getting a glimpse of what an actual loving gay relationship could be like.  While probably serving as an escapist fantasy for Forster while writing it, Maurice still shows an enlightened sense of humanity which would eventually become the prevalent attitude.

It’s a commonly held belief that books are typically better than the movies made out of them.  While Fried Green Tomatoes was actually a pretty good movie, this belief holds true regarding the original source material as well.  The original source material, Fried Green Tomatoes at the Whistle Stop Café, offers an even deeper, richer look at the two central women whose lives propel the narrative along its path than the movie could afford to.  This is particularly true with Idgie Threadgoode, who some might say is the heart and soul of the novel itself.

Coming to terms with your sexuality is typically not an easy thing to do, especially when you’re a bit different from the rest of the crowd.  Going through it alone is absolutely terrifying, which is why having someone to go through it with you can help such a great deal.  That’s why young girls will find a great deal of solace in Liza Winthrop, from Annie on my Mind.  Even though you may not be able to sit down and talk with her about the things that both of you are experiencing, simply knowing that she’s feeling them too and watching her reactions and decisions can help quite a bit.

The amount of LGBT fiction which is targeted toward young adults always seems surprising at first, although when you stop to think, it actually makes a lot of sense.  The teenage years are some of the most volatile for young gay people and they really need something to reach out and anchor onto, especially when they don’t have much of a support system in place.  Young adult fiction can be tricky, however, as it’s often written for a younger audience and won’t hold interest for a larger group.  That’s where Hero breaks the mold.  Although not a perfect book by any means, you can’t deny that Hero has a lot of heart and this is why Thom Creed makes our list.

Being a little mad certainly has its perks.  It’s probably how, in the year of 1928, Virginia Woolf managed to publish Orlando, A Biography, which is a fictional work telling the life of one young man who decides to live forever.  Determined to break boundaries set forth in fiction of the day, Woolf titled her book about a transgender person as a “Biography,” hoping to create a new type of “trans-genre” written work.  Perhaps an even more interesting fact about Orlando, A Biography is that the novel is traditionally held to be written as an immense love letter written for and about Woolf’s lesbian lover, Vita Sackville-West. Celebrate the LGBT characters throughout all types of literature!

Forget the sparkle.  When you want a real vampire, you turn to Lestat.  Long considered one of the sexiest characters in fiction, Lestat is memorable for a number of reasons, including but not limited to the partners with whom he shares his… ahem, bed.  Although his charm is largely self-proclaimed, one cannot help but shudder at the thought of the terrible passion that would befall you should Lestat turn his affections your way.  Arguably the star of Anne Rice’s The Vampire Chronices, Lestat has found himself depicted in a number of ways by ardent fans throughout the decades.

Pulp fiction often touched on lesbian themes but typically followed the standard formula of nice girl has a nice guy, nice girl gets seduced by a wicked (possibly Satanic) lesbian, nice guy eventually gets girl back, and wicked lesbian, I don’t know, dies in a fire. Or commits suicide. OR gets institutionalized. You can really use your imagination as long as you keep in mind that no one who still considered themselves queer by the novel’s climax was allowed to have a happy ending.

Perhaps one of the most interesting re-imaginings of a beloved story, the Wicked series takes a fresh look at the social and political climate of the Land of Oz that led up to the birth of the Wicked Witch of the West, Elphaba Thropp, and the wake left behind after her death.  Whether from the books or the popular musical, we’ve come to see that perhaps this popular villainess wasn’t as evil as first conceived and that, just maybe, she was something of a hero.  But what about her son?

Discuss all 10 Characters in the forum!