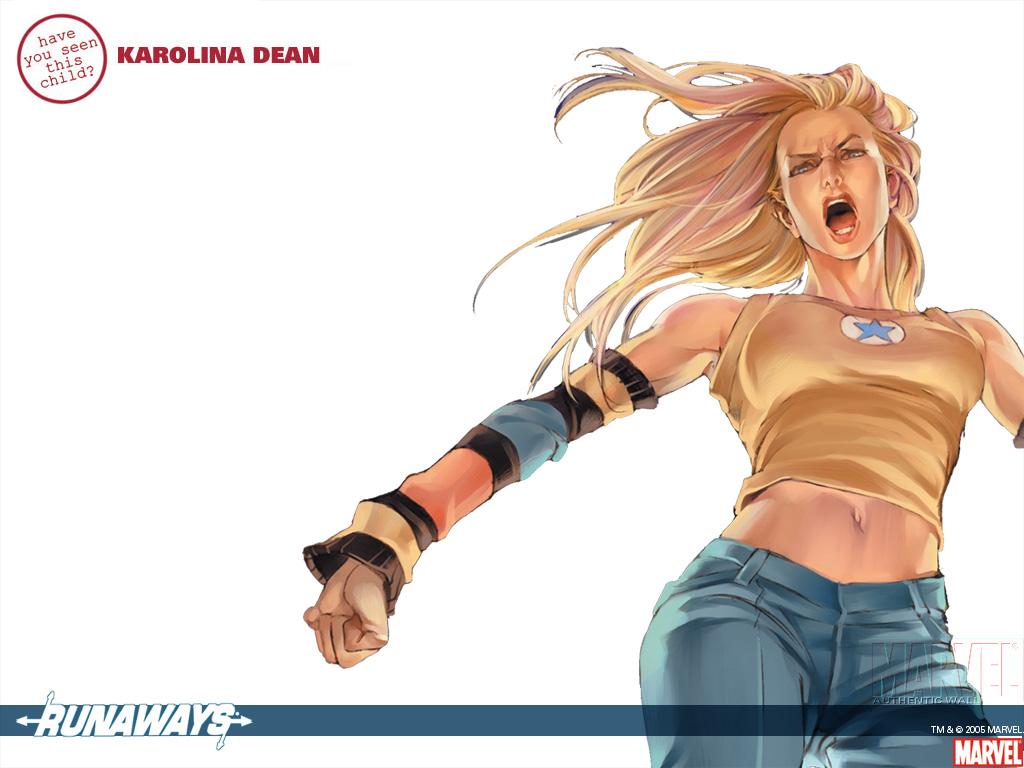 Being a gay teenager is rough.  Trying to figure out your sexuality and place in the world is super tricky in those formative years.  It’s especially rough if you’re on the run from your super-villain parents.  That last part might only apply to you if you’re Karolina Dean from Marvel’s Runaways.

Karolina (or Lucy in the Sky as she’s sometimes referred to), is one of the original members of the Runaways group.  Her parents were members of the villainous Pride that controlled most of California until her and her fellow Runaways put a stop to them.  Karolina’s a member of the Majesdanian alien race, which she only discovers after fleeing from her parents.  While maintaining a human form, Karolina can transform to her Majesdanian form, which contains a beautiful mixture of light and colors.  In this form, Karolina can manipulate solar energy stored in her body and focus it into blasts or force fields.  She can also fly. After a few adventures with the Runaways, Karolina finally comes out to their leader Nico by kissing her.  Unfortunately, the advance is unwanted, making for an awkward situation.  There’s not a lot of time to deal with it, as Karolina’s fiance enters the picture.  Xavin is a Super-Skrull, promised to Karolina to unite their two races when the two become old enough.  He introduces himself as a male, but when Karolina admits she’s gay (to him, and the rest of the Runaways for the first time), he simply changes his gender.

Karolina leaves with Xavin to unite their people, but the two eventually rejoin the team as a couple.  However, the two are broken up when Xavin disguises herself as Karolina, to take her place for crimes against Majesdanians.  Runaways hasn’t had an ongoing series since 2009, but Karolina has had a few minor appearances in other comics.  Hopefully this will change with the new Runaways series set to debut later this year. Have a gay character you’d like to see in the spotlight?  Let us know in the comments!