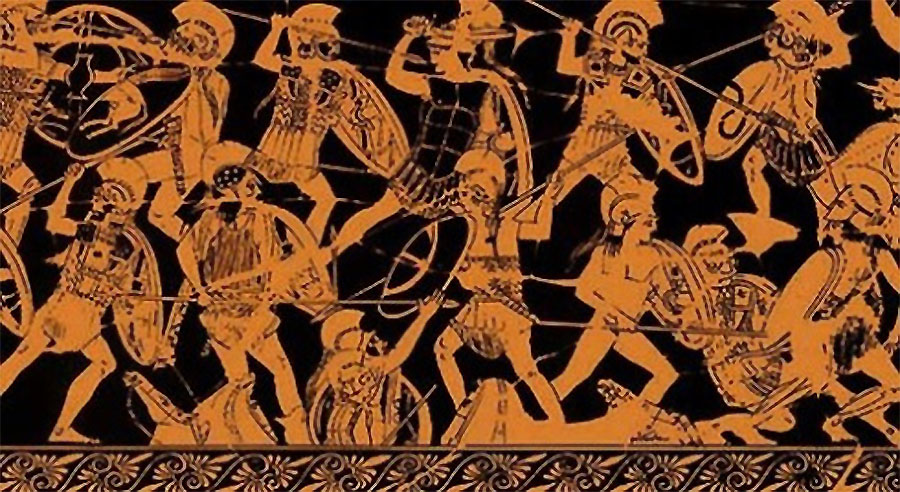 Here at Gay-Nerds.com we’re always thirsty. Thirsty for learning and knowledge that is. As young growing LGBTQI nerds, it’s rough getting in touch with your roots. Because of that, we want give homage to and highlight some of the coolest historical homosexuals throughout the annals (teehee) of history. So, get ready, we’re going to lay down some facts on you, Miss Frizzle style.

Let me paint you a picture. It’s Greece. It’s 424-ish BCE. Now, picture the perfect army. Good. Is it a band of 150 gay couples? Because that’s what it should be.

In Plato’s Symposium, Phaedrus posited that in order to create the ideal soldier, he must be in love. Men behave at their best when they’re in love and fight fiercer. Therefore, no army could be better than one composed of lovers.

Now, back then, being exclusively homosexual wasn’t really a thing. The word, homosexual, suggests not just a sexual practice, but also one’s sexual preference in some way that defines oneself. In Ancient Greece though, most men had wives and children but they also frequently had male partners. These male relationships were usually between an older male called erastes, (lover) and an adolescent youth called eromenos (beloved). These were more like mentors as the erastes were to educate their eromenos in the responsibilities of adulthood and on being a man. The concept of masculinity was dependent on one’s sexual position in bed and it was considered quite demeaning to be on the receiving end of things once you were past 17 years of age. Adult males in a relationship weren’t unheard of but it was considered highly disgraceful.

Now cue, Gorgidas, a Theban military leader. In 378 BCE, he hand picked 300 men to join his army. This was based purely on their ability and merit, regardless of their social class. This group of men were comprised of 150 of these erastes/eromenos pairs from ages 12 – 30. These men were “devoted to each other by mutual obligations of love” and they called themselves, The Sacred Band of Thebes. The Sacred part comes from the exchange of vows and devotion between these men took at the shrine of Iolaus at Thebes.

Now were these dudes successful? Not historically accurate but I’m posting this here because reasons.

The Sacred Band of Thebes kicked a phalanxful of ass for 40 years. They were celebrated throughout Greece for their courage and military success. Initially, they were stationed in the front ranks of the phalanxes of regular infantry but eventually, they were united as a single unit of shock troops. What are shock troops, you ask? They’re the most badass group in the army. Shock troops are the guys whose main function was to cripple the enemy by engaging and killing their best men and leaders in battle.

The Sacred Band sent their cavalry to ride up from the rear and charge while the others got into an abnormally dense formation. The Spartans were confident in their numbers and military power so they advanced upon the Sacred Band. Big mistake. Their leaders were killed immediately in the opening clashes. Now leaderless, the numerically superior Spartans faltered and opened their ranks. They assumed that the Sacred Band would pass through them and escape in order not to risk losses.

The Sacred Band used this opening to flank the Spartans and they were completely routed with the Spartans suffering considerable losses and the survivors having to flee the battlefield. This was the first time a Spartan force had been defeated in a pitched battle and this dispelled the myth of Spartan invincibility.

Their tales of badassery didn’t end there though. In the Battle of Leuctra, Sparta invaded Boeotia. The Spartan army was 12,000 strong while the the Theban army was 8,500 soldiers and severely outnumbered. Despite this, they made a plan. The battle started with both sides’ cavalry leading the charge but the Spartan cavalry were quickly defeated by the superior Theban cavalry. In this confusion, the Spartan army hadn’t noticed the odd formations of the Theban army but they advanced steadily. Now, usually, the Spartan army would stretch out their right wing of the army and encircle and outflank their opponents. Normally, this would rout the enemy forces but at this moment, the Sacred Band intercepted this maneuver before it could be completed. They held off the majority of the right wing’s forces while the rest of the Theban army smashed through the weakened lines of the Spartan army. This caused them to kill about 1,400 of Spartan’s main forced including their own King. Sparta soon requested a truce and this battle cemented Theban independence from Spartan rule and laid the groundwork for the expansion of Theban power.

Sadly, this win streak was not meant to last forever. Defeat finally came at the Battle of Chaeronea at the hands of Philip II of Macedon and his son, Alexander the Great, (well, future The Great). The traditional Theban hoplite infantry were no match for the long speared Macedonian phalanx. The entirety of the Theban army and all of its allies lost the battle and fled. But, the Sacred Band, oh no. They were not ones to flee. Even though they were surrounded and overwhelmed, they staunchly refused to surrender. They fought and fought down to their last man until all 300 fell. When Philip II walked through the battlefield and saw who they were, he commended their bravery and said “Perish miserably they who think that these men did or suffered aught disgraceful”

So yes, these badass grecian gents kicked ass, took names and fought down to the last man and this makes them worthy of recognition. I will always pass on the tales of your bravery, you crazy son of a bitches.

If you like this article or if you have an idea of who to feature next, let us know in the comments!