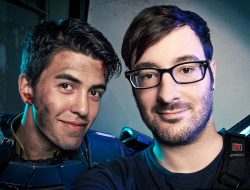 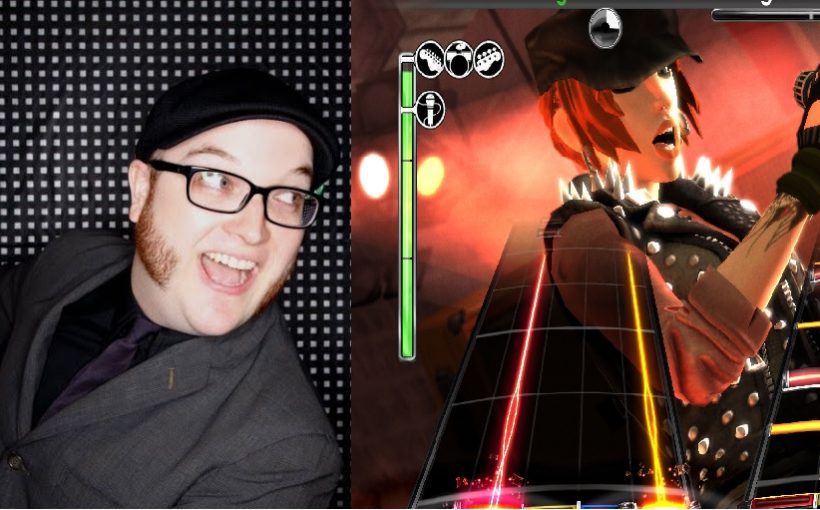 Harmonix (the studio behind the juggernaut rhythm game franchises Rock Band and Dance Central) can’t be stopped. Last year, they released two of the best Kinect-friendly games available for the Xbox One, as well as their first PC-exclusive title. This year, they’re continuing that hot streak with a new installment of their classic Amplitude franchise, as well as getting the band back together with Rock Band 4. We sent some questions to Eric Pope, the product manager at Harmonix, who was nice enough to answer, even amidst the chaos of PAX East. Here’s what he had to say:

Gay-Nerds: Last year, Harmonix released Record Run, Dance Central Spotlight, A City Sleeps, Fantasia: Music Evolved, and this year we’ll be seeing the return of both Amplitude and Rock Band 4. My question is, when do you find time to sleep?
Eric Pope: Considering I also had a baby (er, my wife technically did the “having”) last year, this is a question I have no answer for. I am the walking dead. But to answer seriously, Harmonix has become this incredible idea laboratory in the last couple years, with more projects being pitched internally than we can produce. Which is amazing! Last year was a big one for us in terms of releases, considering the year prior (2013) we released zero games. There’s a ton of energy at the studio lately, and I think you’ll see that come through in both Rock Band 4 and Amplitude later this year.

GN: Congrats on the baby! Is this your first? If so, how are you adjusting to balancing your new fatherly role with your role at Harmonix?
EP: Yes! My first, and it’s been a trip. I hate being that guy, but it’s been nothing but positive, transformative, and life changing for me. Total perspective shifter. Harmonix, and my direct manager specifically, have been absolutely supportive of maintaining my work life balance since he was born, so I generally get out of here at a reasonable hour. I travel quite a bit for my job, so that’s always the toughest, but even that I’ve been able to let off the gas a little bit. But I’m ready now to lace my boots back up and tackle the world tour that promoting Rock Band 4 will require!

GN: A City Sleeps was the first PC game for you guys, correct? What made you decide to target the PC market with this release?
EP: There’s a desire here to expand our horizons. Harmonix has always been driven by exploring new tech (EyeToy, Kinect, VR) and while PC is most definitely not a new tech, it’s an area we’v

e never gotten into with our games. We started last year working on a PC project called Chroma, which culminated in a closed alpha on Steam. That got us familiar with Steam as a platform and, in fact, the team that made A City Sleeps spun off from that Chroma project. When they pitched the game internally, we all thought (I was the Product Manager for the game) this was a great first title to test the waters on Steam. That decision was based on a number of factors, one of which being the niche nature of shmups, and the proven track record of that genre on PC.

GN: How’s Chroma coming along?
EP: We learned a ton during the development of Chroma and its closed alpha. A lot of what we learned we leveraged into A City Sleeps, our OTHER musical shooter concept. In its current state, there are a number of aspects of the game that our alpha taught us will require significant reworking, so for the time being it’s not in active development as we focus on Amplitude, Rock Band 4, and other smaller projects. A bunch of us here still love the idea of Chroma dearly, and hope to someday bring it to market for folks.

GN: I’m really looking forward to the new Amplitude, and am so glad the crowdfunded project was such a success. What was working with Kickstarter like?
EP: That campaign is a complete blur in my brain. I’m also very happy we did it, and Amplitude was absolutely the best project for us to do with Kickstarter. But man, running a Kickstarter campaign is so much more wor k than it seems. I say this as a member of the team who runs and plans all of our live events, game announces, and product launches. Those are always marathons, and a Kickstarter campaign is no exception. We asked for what was perceived to be a high amount of money, which involved us doing a lot of education and direct interaction with individual potential backers to convince them. We had 3-4 people working full time just on managing that process and community for almost a full month, and we still only barely crossed that finish line. Kickstarter is an amazing service, but people should not go into it lightly.

GN: I’m sure you’ve been bombarded with questions about Rock Band 4 already, but I would like to know if there’s one song or artist that you’re super excited about? You don’t have to name any names, but is there one you guys tried to get for previous installments and were finally able to include?
EP: The song list traditionally is the piece of the game that comes in the latest. We’re often swapping out songs right up until the last minute to make sure we have the best soundtrack possible. So, it’s too early right now to say which one song or artist I’m excited about! We’re actively pursuing all the bands you might expect us to be, but nothing we’re ready to announce just yet.

GN: Now, tell us a little about yourself. How did you get involved with Harmonix?
EP: I’m on my eighth year here at Harmonix now, which makes me feel SO OLD. I started as a Senior QA Tester on the European version of Rock Band, having escaped the financial industry to start a new path in games. About a year after I started, I was transferred to our Community department, which took me all over the world, playing Rock Band with fans at almost every show you can imagine. Ask me about the time I played Beatles: Rock Band with Tom Hanks. (he’s 100% the nice guy you imagine him to be!) Having spent all those years on the front lines with the dedicated players in our community, I gained a pretty deep understanding of who our customers are. So when we introduced Product Managers into development, that role was a good fit for me, and is what I do now. I don’t know if any of this was interesting!

GN: Holy crap, how on earth did you get to play Beatles: Rock Band with Tom Hanks?
EP: Tom Hanks is a huge Beatles fan, and fan of 60s music in general, which is evident from his love

letter to that era of music in That Thing You Do! One of the few wonderful things about E3 is that it takes place in LA, where the stars live. So somehow he (or his lovely wife Rita) got wind of us showing the game there so we invited them to come check it out. The story, which has sort of become legend at this point, is that he slightly delayed a trip to Normandy, France to honor WWII vets with President Obama, just to play our game! And man, he played every single song in that E3 build, on each instrument. He was amazingly nice, gracious, and charming. Self-effacing. Easy to talk to. Basically sealed the deal for me on him being the best guy in Hollywood.

GN: Your Harmonix bio says you helped write the story for Dance Central 3. What was that process like?
EP: Harmonix has always been great about letting employees stretch out and try different things. Before I worked at Harmonix my dream was to be a screenwriter, so when I got here I’d always hoped I could get into writing a bit for our games. When DC3 spun up, they knew they wanted there to be a “story mode” which meant we needed an actual story. Harmonix, up to that point, never went too deep on game narrative design! So they did an open call within the studio to submit some writing samples and create some new character profiles. I was chosen along with my colleague, Alli Thresher, to write the game! I mainly focused on the story mode while Alli handled writing EVERYTHING ELSE. I got off so easy, while she had to have a dozen VO lines written for each character to say in dozens of specific in-game situations. We, of course, did this all under the kindly supervision of Helen McWilliams, who has been here forever and is an amazing writer. I loved it, and would be psyched to do more in the future if the opportunity comes up.

GN: Can you describe an average day working at Harmonix?
EP: There are no average days here, really. Sometimes I wish I was a coder so I could just sit down at my desk in the morning, and code all day till I live, and have this THING I’m left with that I wrote. For my role, it involves tons of planning, meeting and communication. So, I’ll give today for example: I got in at 10am, our standard opening time, caught up on a bunch of emails ranging from PAX East followups to E3 planning, to a bunch of small tactical things in between. At 10:30 I met with the Rock Band publishing team to really start the process of planning (at a high level) for every big beat for the rest of Rock Band 4’s promotional cycle. Then back to my desk for more emails, which I sort of squandered to make up a list of songs I want to fight to get into the Rock Band 4 tracklist. Then at noon was our company lunch, which we’ve always called “Weely” based on a typo that just stuck. Today’s weely was long, involving project updates, business updates, an employee’s “10 years at Ha rmonix” presentation, congrats to a new dad on staff, and birthdays. Weely is great. We ate fancy fried rice today. After lunch we did a whole afternoon of sprint reviews. Every team within Rock Band 4 is given a chance to present the facet of the game they focus on, and the work they’ve done on that area in the last few weeks. It’s a really great way to get a comprehensive STATE OF THE GAME. And it is always super energizing. I’m all hyped up right now, I can’t wait to start showing people like you what we’ve been working on!! So that made up the rest of my day, pretty much. Hope this was interesting.

Both Amplitude and Rock Band 4 are set to release later this year. You can check on the progress of those and other projects at Harmonix’s website. To hear more from Eric, you can follow him on Twitter. Thank you so much to Mr. Pope for answering our questions!