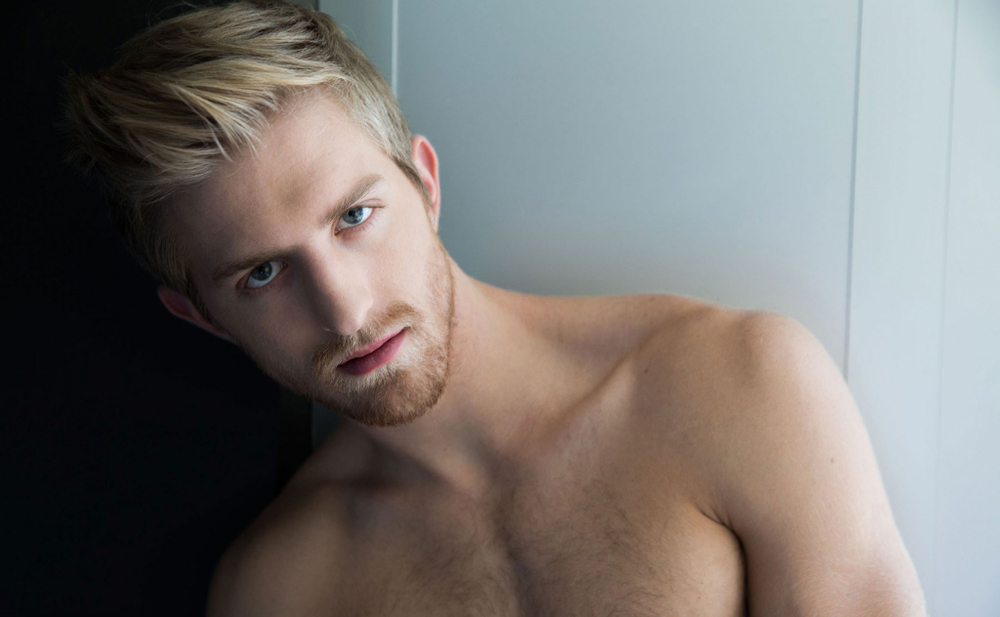 You know, it’s kind of rare meeting a guy with such good looks and charm. It’s even rarer finding out that that someone likes getting down and nerdy. While going on a gay Twitch.tv spree, I was kind of surprised to see Levi Michaels’ name pop up in the results. I thought to myself, “That can’t be right… It’s probably some dude with the same name” But I checked up on it and lo and behold, it was the Cockyboys’ model, Levi Michaels streaming Guild Wars 2 while talking about Destiny 2. Levi Michaels: Well I’m not shy at all, I feel very comfortable with my body and my sexuality, and I wanted the opportunity to travel the world and never question “what if?” I spent a few months thinking about the pros and cons and just decided to dive in. I made a few calls and a month later I was on a plane to LA.

GN: So what was your favorite scene that you filmed?

LM: Probably my scene with Colby Keller. He’s so easy to work with and educated and things couldn’t have gone any smoother. The end result looked beautiful, and it’s in large part to how comfortable we felt around each other.

GN: What was most surprising to you when you got into the industry? LM: Well I didn’t expect the shoots to last as long as they do. We’re talking a full day filming that 20 minute scene. It can really be an exhausting, albeit lucrative, experience.

LM: Well my degree is in marketing and before I went full time entertainment, I had a desk job at a film studio working on online marketing campaigns. I loved that job, so I expect I’d still be there.

GN: Time to get down to the nitty gritty. What nerdy interests do you have?

LM: Aside from gaming? I’m a huge Harry Potter buff. I’ve probably read the whole series about 10 times at this point. Both of my brothers have Harry Potter tattoos. We’re a nerdy family. I also like to practice coding every now and then just for fun, but I’m not an expert programmer or anything. GN: What is the nerdiest thing that you have done or that you own?

LM: The nerdiest thing I own is without a doubt my computer. I built it myself to make sure I had all the specs I wanted for gaming and streaming and video editing. Every boy that enters my bedroom gives it a double take.

GN: Since you play videogames, do you consider yourself to be a “Gaymer” or a “Gay Nerd”?

LM: Absolutely. I have a group of online gaymer friends I play with pretty much every day. I even film some Let’s Plays with them for YouTube. Even my gamer tag is HellfireHomo. Loud and proud, baby!

GN: Haha, that’s awesome! What made you decide to stream Guild Wars 2 on Twitch?

LM: I have no idea. I live a life where most of my world is on a camera and it seemed a little odd that this huge part of my life got no coverage when everything else did. I thought it might help people relate to me on a more personal level, so I gave it a shot. It ended up being a lot of fun and it’s something I do almost daily now.

GN: What is your all-time favorite game?

LM: Right now I’m hooked on Destiny for PS4. The game is the perfect cross between MMO and FPS. Though my all time favorite game was City of Heroes. That was my first true love when it comes to gaming. If they reopened the servers I’d be back into it at launch.

GN: What is your favorite Pokemon?

LM: I’ve always been a fan of Ekans. I have no idea why.

GN: Which apocalypse scenario do you think you would do the best in? (ie nuclear holocaust, Mad Max, Zombies, etc.)

LM: I talk about this so often. I would be a total rockstar in a zompocalypse. I was born and raised in Texas where we used to shoot guns for fun, so I’m well acquainted with firearms. I also go a bit psycho in high stress situations where I just turn off my emotions and operate logically. I think those two things make for a pretty perfect survival mix.

GN: If you could meet a single person in all of history or in fiction, who would it be?

LM: Hermione Granger. Without a doubt. Anyone who says anyone else is wrong.

GN: If you could have a super power, what would it be and what would you use it for?

LM: I’d love to teleport. I’ve got such a since of wanderlust. The things I could explore and see. The boys I could meet.

GN: Thanks for the interview! It’s been a pleasure!

If you want to learn more about him, check out his site  or his twitch stream. Or check him out on his social media!