Flip Your Wig – Botch “We Are The Romans” 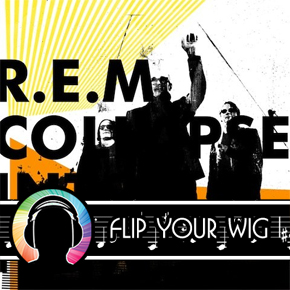 Welcome to Flip Your Wig, Gay-Nerds’ biweekly column dedicated to musicians of the LGBT community and their allies. This week we’re going to look into the latest entry of living legends R.E.M.’s latest album “Collapse Into Now”. Will it turn you inside out, or is it just a pale imitation of the life found on their prior masterpieces?

Do I even need to write about R.E.M.’s accomplishments and history at this point in their career? Sure, they’re credited with tipping underground “college rock” into the mainstream, made a number of really powerful and influential records that I’m sure nearly everyone has heard by now, and had an excellent comeback after a near-decade slump with 2008’s Accelerate. The world seemed to be theirs for the taking as they embarked on several high-profile tours, headlines a few festivals, and took some time off until “Collapse Into Now” hit store shelves last week.
It’s easy to write a review for something that you enjoyed or disliked. You can attack just about anything in a product or conjure up a number of flowery images that express your love or disdain for something. It’s difficult to patch something together for something that doesn’t leave an impression on you. I feel like this is how a teacher must feel when having a conference with a truly average student who is doing just fine in class, but isn’t putting himself or herself out there enough to be remarkable. I feel the same way about “Collapse Into Now” and I can’t really feel anything about it besides “that was nice.”

“Collapse Into Now” is simply competent and enjoyable. In true R.E.M. Fashion, no one performer is mixed over or above any other and the band is as tight as ever as an ensemble. Everyone’s favorite equal opportunity offender Mike Stipe gives a charismatic performance, but it doesn’t ever reach the range or intensity that made “Accelerate” bite or the naked vulnerability that made “Document” or “Automatic for the People” essential listening. “Collapse Into Now” just wants to be a big rock record with a few serious ballads thrown in. The more rock-oriented songs sounded like stuff off of “Monster”; fun aural enjoyment. They also implement some of the most head scratching lyrical moments in the band’s cannon. “ I cannot tell a lie / It’s not all cherry pie” Really Mike? Really? R.E.M. works best when it gets existential,esoteric, or scathing, not delivering slogans. When the band returns to its quieter moments, the album works better (and those saddened by the lack of mandolin will be overjoyed).
R.E.M. seems comfortable on this record. They’ve been around for 30 years and deserve a victory lap or three. There’s nothing overly offensive or daring on it,although they do wrangle some famous friends in for a few tracks which is very atypical. In all honesty, this is the Diet Coke of Accelerate; it kind of feels like the original, but it doesn’t hit that sweet spot that the other did. However, it’s certainly not a bad product; it’s just a bit unremarkable.

Recommended If You Like: Counting Crows “This Desert Life”, Sugar “Copper Blue”, The Lemonheads “It’s A Shame About Ray”
Like it? Loathe it? Wonder where Mike was with those mysterious yellow canisters a year ago? Talk about it in our forums.