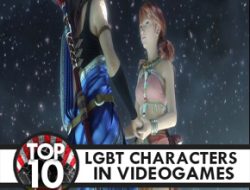 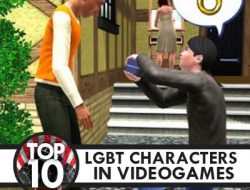 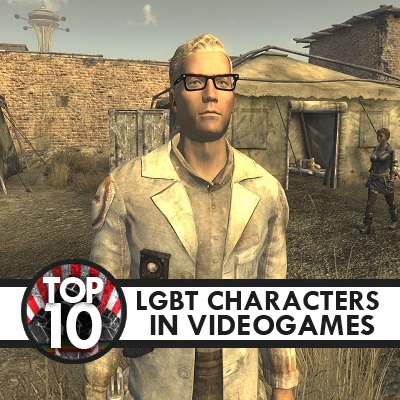 I honestly had no idea that Arcade was gay until I read more about his character. It’s not that there weren’t hints or that Obsidian were afraid of exposing him as sexual; it’s just that Arcade was simply a guy who happened to like guys. Unlike some other role playing games with gay characters, Arcade’s raison d’etre wasn’t his gayness. He has a very intricate backstory and personality produced a very ethical and likable man who could serve you very well if you decide to interact with him, and who could also stand his own ground if you act against him.

Arcade’s father died in a skirmish, and his adoptive family roved for ages to get by. Applying himself to his interests in sociology and medicine, Arcade hoped to find a way to make himself useful in a future where ethical behavior can be restored. While it’s not hard to talk to Arcade, he’s always a bit guarded about his past and opening up too much about his past for fear of the wrath of the NCR. What he lacks for self disclosure, he makes up for in sarcasm. Something of a rarity in gaming, Arcade is gay, but prefers to spend his time working towards social change or being a dry, snarky bastard than hitting on other characters. He’s more than capable of patching wounds and can cover your ass quite well with a Plasma Gun. His sexuality is merely a part of him, not his compass. He’s not living for another character, not a campy tramp, nor a tragic character dealing with a cruel, strange world.

Depending on how you decide to act in New Vegas, your relationship with Arcade, and any member of the cast, can change drastically. He’s not going to wait for you to save him, nor is he going to follow you blindly to the ends of the Earth just because you can sweet-talk your way into a few interesting dialogue options. Arcade has his own ambitions and the determination to do what is right, and he’d rather chase those dreams than chase tail. At the end of the day, Arcade is just himself, a man, who in addition to everything else, happens to like dudes. Frankly, after decades of terrible representations, it just feels refreshing to be around someone so normal.