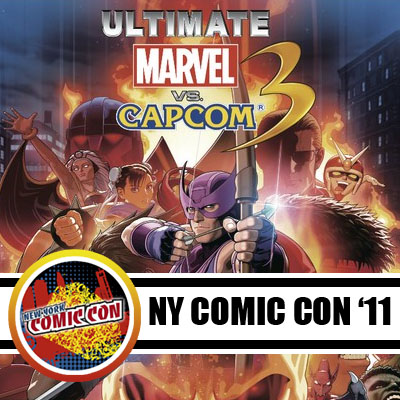 With 48 fighters, 8 new stages, a retweaked X-factor, and a spectator mode, there’s a lot to be excited about for Ultimate Marvel vs. Capcom 3. Yeah, it’s coming out just half a year after the regular game dropped, Capcom has been re-releasing all their fighters six jillion times, blah blah blah. Put your internet rage away and stop pretending you don’t want this. Now that we all have our happy faces on, let’s get into the New York ComicCon scoop.

Phoenix Wright and Nova have joined the fray, Capcom giving thanks to the fans for pushing so hard to get Phoenix Wright into the brawl. The game box will get reversable art, with each side being drawn by artists on the Capcom and Marvel sides. Every character will have six costumes now and more costumes will be available as DLC (including Storm’s mohawk!) and preorder bonuses. New stages, including the City That Never Sleeps variant take on New York and an extremely gloomy Days Of Future Past, are jam packed full of Marvel and Capcom references.

Take note in the background of the Days Of Future Past stage and you’ll see a poster of characters that were in MvC2, but not in MvC3, all with SLAIN or APPREHENDED written across them…except for Megaman. Capcom loves trolling.

The new Heroes and Heralds mode, available as free DLC, will focus around cards you use together to unlock abilities and change up your characters. This echoes the Gem System unveiled yesterday in Street Fighter X Tekken, though without the auto blocking power (hopefully), and includes abilities like invisibility, attack parrying, special move cancels, and tons of other crazy bits. Winning battles will unlock cards, of which there are more than 100 and all feature non-playable characters from the Capcom and Marvel universes. The mode extends to the online and will include a clan aspect, where players fight together as either heroes or heralds in some sort of campaign over the fate of the Earth. And Galactus Mode will finally let players destory the Earth on their own, putting an evil spin on the Arcade Mode and unleashing wave after wave of heroes against the would-be world devourer.