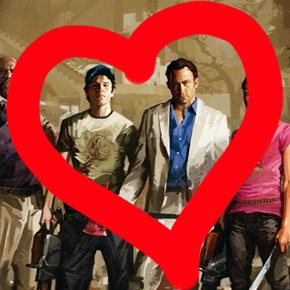 Are They or Aren't They: Nellis

It’s no secret that I know a thing or two about fanfiction. Beyond the sheer horribleness/absurdity of some stories, I like the psychology behind writing fanfiction.  Seeing what people would change or add to such-and-such universe is rather intriguing.  Why do so many Twilight fans want Bella to be a Victoria’s Secret model and Edward not to be a vampire? Why would someone write a 40+ chapter epic about Justin Bieber attending Hogwarts School of Witchcraft and Wizardry? Why is Nick/Ellis such a popular pairing amongst L4D fans? It may not be as popular as the Zoey/Ellis pairing, but Ellis’ attraction to Zoey is confirmed in the game. The idea of him and Nick hooking up is one born and popularized in the fandom.  This certainly isn’t the first time two seemingly heterosexual male characters where slashed, and it is by no means the oddest pairing I’ve seem (that would be Snape/Snape’s nose…don’t think about it). Still, the couple interests me enough for me to wonder, “Are They or Aren’t They?”

Why they might be gay: Anything’s possible. Valve has chosen not to divulge much about the Survivors’ pasts, instead letting their personalities be revealed naturally, bit by bit.  Would anyone be surprised if one of Ellis’ stories ended with the one time him and Keith totally made out?  In the game it’s clear that Ellis likes Nick despite the latter’s obvious distaste for him, and eventually Nick grows to appreciate Ellis’ flippancy. They have the potential to grow even closer as they struggle to survive together.

Why they might not be: Both characters have shown interest in women and Nick even mentions having been married at one point. Ellis falls for Zoey as soon as he lays eyes on her, going so far as to state his desire to marry her.  In addition to treating Rochelle a bit nicer than his male companions, Nick can sometimes express his disappointment at not being able to repopulate the earth with her if she dies during a campaign.  Indeed, Nick is often described as a ladies man and he has the lipstick-stained collar to prove it. Their relationship in the game is more bros than lovers. Why they should be gay: People seem to really want to know more about the Survivors. Players just love Ellis and all he does is gab about “This one time…” Making him and Nick a couple would be one more piece of character development for fans to eat up. Also, unlike last week’s couple, just hinting at a relationship between the two but never outright confirming it, while rather torturous, would fit with the current narrative style in the L4D games. Just think of all the “Watch my back!” jokes the two could make.

Why they should stay in the closet: Love may be able to bloom on the battlefield, but can it blossom during the zombie apocalypse? Do you really have time to check someone out when you’re constantly on the lookout for the next wave of the Infected? Valve originally had a romance scripted between Zoey and Francis in L4D1 that was scrapped when play-testers found it too distracting –and we all know how distracting gay romances in games (or anywhere really) can be on their own. It’s also somewhat troubling how fans’ depictions of the two together match the representation of gays in anime. Tags: Are They Or Aren't They?, left 4 dead 2, Nellis, Nick/Eliis, you have alerted the witch!

» Videogames » Are They or Aren't They: Nellis