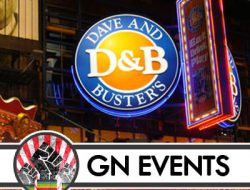 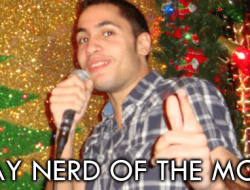 Gay Nerd of the Month: Kaz

GN: Congratulations on being November’s Gay Nerd of the Month!
GN: Any message for your fans?
Kaz: Thanks for the votes, and one of you left your underwear at my place. And I’m sure I found a hidden camera in my toliet.
GN: So that’s how you won. I assumed there was some sort of bribe going on when you were uncontested but I chalked it up to your looks and charm
Kaz: Damn right it was my looks and charm. I’m chalked full of vitamin sexy.
GN: So what do you go by IRL? Kaz-chan?
Kaz: Oooooh, you’re just asking for it, mister. Kaz: I have like a million nicknames, but I mostly just go by Kaz. I go by Andrew at work and on my bills.
GN: Oh really? Where does it come from?
Kaz: What, Kaz or Andrew?
GN: Well, I’m assuming Andrew is your real name so, I was wondering about Kaz
Kaz: Kaz actually came before Andrew. It’s short of Kazuo. My Japanese grandmother gave me that name and it sorta stuck. When I moved to the states my parents thought I should have an English name, so Andrew came later.
Kaz: Before all those I had my Chinese name too.
GN: So you have a pretty multiethnic background huh
Kaz: Yeah basically Taiwanese/Japanese. I usually mention my Japanese side a lot more since there’s more jokes to be made. No one have good Taiwanese jokes.
GN: Google is giving me generic Asian jokes
GN: oh, and apparently pandas
Kaz: Pandas are funny.
GN: That they are
GN: So what do you do when you’re offline?
Kaz: Workout, work, eat, poop, and sleep. Sometimes not in that order.
GN: Hopefully not together as well
Kaz: You’ll be surprised how much fun pooping is during the others.
GN: I’ll keep that in mind
GN: Speaking of working out, you’re a kick boxer right?
Kaz: Yeah I’ve been doing Muay Thai for about five years now. It was a way for me to gain some confidence and learn to defend myself, and luckily it did save my life once when someone almost pulled a gun at me. GN: You can’t just say something like that and not give details
Kaz: Well to make a long story short, I’m not the type of guy who ignores someone in trouble. There was a man screaming at her girlfriend one time and I just asked him to calm down. The guy wanted to fight and got even more pissed when I refused, and he was reaching into his jacket to pull out a gun. Lucky for me I had my hands up to protect myself like my kru have taught me and I grabbed his wrist
Kaz: and swept his legs down. Another guy came by and helped me hold him down while someone else called the cops.
Kaz: It was a terrifying experience but it never it me until hours later that I could have died.
GN: Geez, that’s nuts. She’s lucky you were there. I’m glad you’re relatively intact and alive. Or else Kaz body pillows would have been awkward
Kaz: I think I rather be shot than see a real Kaz body pillow, but if it’s for charity, sure, I’ll give permission for one. Just no holes.
GN: I can’t guarantee there won’t be holes after we hand it over
Kaz: Now there’s a scary thought.
GN: If it makes you feel any better, you can imagine a more Calvin and Hobbes relationship instead
GN: Life is an adventure, Kaz!
GN: Let’s go exploring
GN: …your pillow-ey holes
Kaz: Some board member pretending the body pillow is really me and playing games with it? That’s even scarier.
Kaz: I’m so hoping my boyfriend never reads this interview.
GN: Haha, well, maybe this will just be relegated to the darker corners of the internet GN: So what do you like to do during your spare time?
Kaz: When I’m not stressing out with work or punching someone’s face in, I mostly play video games. I’m a fan of RPGs and fighting games, although fighting games never let me relax. I’m too competitive to lose so it can get ugly sometimes.
Kaz: I also play card games such as Yugioh and Magic: The Gathering with friends at least once a week. They don’t like my decks since I’m able to put so much money into it.
Kaz: Again, it comes down to not liking to lose
GN: Haha, well competitiveness means being passionate about something
Kaz: Or that I have a major anger issue.
GN: Or you’re overflowing with the heart of the cards
GN: So, in the forums, you run these amazing Battle Royale threads and you’re even generous enough to over these great prizes. What was your inspiration and why do you do it?
Kaz: Well dealing with numbers and boring old men all the time for work made me miss all the short stories and drawings I did when I was little. I wanted to try a game based off of one my favorite movies of all time. I figured I could give prizes as incentive for people to play along, but it turned out people just like the game regardless.
Kaz: As for the expensive prize, I have a deep pocket and I’m happy when someone else is happy. I tend to spend more on others rather than myself.
GN: Yeah, it was pretty well received
Kaz: I may up the ante with something even better if I do a third.
GN: There’ actually a 10% increase in forum activity when it runs
Kaz: Wow, I didn’t think it was that popular. That motivates me to do another one.
GN: RaNdOm QuEsTIoN TiEM!
Kaz: Oh noes!
GN: What’s the most weeaboo thing you’ve done?
Kaz: Hmm… I’m not sure. Does it actually count as a weeaboo thing if I’m part Japanese?
GN: Don’t be lame.
GN: There has to be something deep and dark that you’ve done
Kaz: There’s nothing really, but I day dream about being in Tokyo all the time. But unlike most weeaboos, I’ve actually been to Japan several times AND have a Japanese boyfriend.
GN: living the weeaboo dream then
Kaz: Yup.
GN: Kill, Fuck, Marry: Ichigo, Naruto, Goku
Kaz: Fuck Ichigo, Marry Goku, Brutually kill Naruto.
GN: If you could turn anyone gay, who would it be?
Kaz: Wow, I have no idea. There’s so many to choose…
Kaz: But I’ll just go ahead and choose the first one that came to my head: Koji Murofushi
Kaz: I have a thing for big dorky Asian jocks.
Kaz: There’s just something bout dem bara guys right?
GN: Hahaha, true enough
GN: Anyway, thanks for the awesome interview!
GN: Congratulations on being GNotM!
Kaz: Does this honor come with a statue in the GN Hall of Fame?
GN: You’re already immortalized in pillow form

Talk about him in the forums