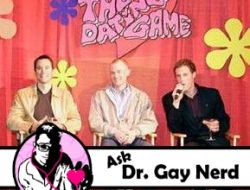 Ask Dr. Gay Nerd: How Do I Even Begin? 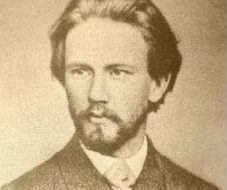 Gender: Male
Age: 24
Location: Halifax, Canada
Forum Screen Name: Harps
Orientation: Gay
GN: Congratulations on being June’s Gay Nerd of the Month!
Harps: Thank you very much. It came as a very nice surprise.
GN: Anything you want to say for the legion of adoring fans?
Harps: Haha well, thank you very much to all of you. This being my first forum, I didn’t know what to expect. But it has been a real blast being a part of it.
GN: Oh really? That’s surprising. You’re pretty affable online
Harps: That probably is just an off-shoot of how I am in real life.
Harps: Also I’m glad people like the zany shots I put up
GN: Like is putting it rather mildly. There were a couple of “ur hot”‘s thrown in there
Harps: hahahahah yah, I did get a few messages because of that.
GN: Any Tits or GTFO messages?
Harps: Mmmm there have been a few actually.
GN: Haha, I was hoping you’d say no but hey, I don’t blame them
Harps: hahaha why thank you
GN: So what’s it like for Harps in real life? What do you go by anyhow?
Harps: In real life most people know me as Harps. Otherwise it’s Jamie. Legally James
Harps: And then there are a few people with their own nicknames for me
GN: Is there a story behind the name?
Harps: Not really. Just came from my last name. I used to be named little because my brother went to the same school
Harps: I can’t remember who said it first but it was back in High School and it just stuck
Harps: I should probably answer your first question before we get side-tracked or something
GN: So what’s it like for you IRL?
Harps: Well, I finished university just over a year ago. Took a lot of time off and did some sight seeing. Currently applying to various companies to get a job so I can make money to then spend money on fancy shoes and watches.
Harps: Oh and dress shirts, can’t forget those. So right now my day is quite open, filled with games, tv, and hovering over the forums.
GN: Sight seeing eh? Sort of explains why you get chased by bears GN: There better be an interesting story to that and it better not be “Photoshop”
Harps: Sadly you are correct. That was a pic from a project we had to do. We had to design a bypass for trucks to an industrial park.
We went out to the site. My friend took a pic and photoshopped in the bear.
GN: Oh you and your shenanigans
Harps: haha indeed, soo many shenanigans
GN: Is that a wistful nostalgic comment or a “Teehee, I’m naughty but I won’t tell you anything” comment?
Harps: hahaha. um……. I will say that in first year my friend hired a hooker and she entertained a room of 40 men and women for an hour. Pink dildo’s were involved
Harps: And my friend being such an upstanding person said that it was my birthday that evening.
well my fly was unzipped and the dildo was inserted there. I was then laid out on the floor and she just bobbed up and down.There was another guy that ended up with his shirt off and about a litre of glitter all over him.
Harps: And just for setting, this was taking place in a hotel room with everyone sitting and standing on the 2 beds. And her “pimp” (we assumed) was standing over in the corner.
Harps: My 2nd time up there she made me go on all fours and pull my belt off, lowered my pants and whipped my bare bottom. I was literally the direct image for a “deer caught in headlights”
GN: And here I was thinking this would be a PG-13 interview…
Harps: hahahaha, sorry. Guess it got bumped up to an R
Harps: This is where you keep this part and edit it for the front page
GN: Don’t apologize. The filthier it is, the more hits we get.
GN: So what are your main nerderies anyway?
Harps: I’m a science nerd, a car nerd, games nerd. Followed by anime and manga. As well as some art in there I suppose, but I don’t think I’m at that level of nerdery anymore.
GN: Car nerd eh? That’s sort of rare
Harps: Yah, I love cars to death. Top Gear (UK!) is my life. Lately my parents and my brother have been turning in their cars so I’ve been helping them pick something nice
GN: Haha, how’d you get into it?
Harps: Since I was a kid, loved all the Hot Wheels, and micromachines.  I used to get out tracing paper and trace cars I liked.

GN: Haha, those were the cool toys. I remember having a pair of cars that would change color in the freezer. They ended up being fodder for my Power Ranger Zord attacks though
Harps: hahaha yup. Just like Barbie!……I mean…..
GN: …go on
Harps: I don’t actually own any Barbies. Sorry to burst your bubble. I had Beasties toys while my younger sister had Barbies. Then she had Polly Pocket and I had Might Max play sets
Harps: My parents never liked Power Rangers. They were one of those parents that didn’t like the kids watching it.
GN: So what was your daily source of violent media as a kid then?
Harps: oooooohh. Hmm that’s a tough one. I mean I did watch it secretly on Saturday mornings on Fox. Along with Digimon and all those other shows
Harps: But daily it would probably be the news or something, as lame as that sounds. I would stay up with my parents and just watch the news everynight.
GN: Haha, how conscientious.
Harps: hahahaha yah
GN: It would actually bug me more if my kids would watch the news with me
Harps: They were fine with real violence but fake violence was a no no. That and game violence to. You want them to feel depressed about the world later in life then? Cheaper shrink bills?
GN: It’s all about the delayed pay off. Sort of like eating dessert last. Mmmmmmmmmm children tears and disappointment mmmmmmmmmm
Harps: haha. It’s how I stay young and beautiful!
GN: You must swim in it then haha
Harps: I think that’s the secret behind Maybelline and yes, yes I do. In my pool behind my mansion.
GN: Anyway… what’s the story behind that rather fetching vest Harps: The rather fetching vest? Thankfully I only have 1 so that’s easy to figure out. I got that back in Montreal a few years back. Saw it on the rack in Sears or The Bay. I think I was with my mom and she ended up buying it for me.

Harps: Which was nice. Sadly I have yet to find another nice one I like. I’m also looking for a button up vest. But they are either hideous or they are gigantic.
GN: And the poofy hat?

Harps: haha that is my younger sister’s hat. She swears she started the trend at her school. She bought one and wore it everywhere and now everyone wears something similar.
GN: And what about that awesome green shirt? What’s the story behind that? Harps: Well, I came across an article one day that led me to a site. On this wondrous site I met many wonderful people. One weekend, a noble leader declared there to be shirts in the store. Nice ones at that.
Harps: I made my way to the store post-haste and bought myself a lovely green shirt. That I shall wear proudly at this year’s Pride Parade
GN: Oh youuuuuuuuu.
GN: Anyway, What’s the gayest thing that you’ve done?
Harps: oooh that’s a tough on. Apart from making out with guys you mean?
GN: More rainbow than that. Much more rainbow. My eyes should be birthing unicorns after reading your story
Harps: Oh god. I don’t think I have many things like that though.
GN: But you have a stripper humping you story? What are you, straight?
Harps: Well for years I was helping my old roommate pick out ensembles to wear and everyone thinks I am. I have to convince them otherwise.
Harps: Could be going to buy smaller and smaller underwear, or buying a sex toy for myself. hahahaha
GN: …do tell about the sex toy. You can’t just casually drop these things and expect me not to ask. And maybe the underwear.
Harps: hahahaha, well for the sex toy the lady thought I was getting stuff for my girlfriend.  I told her it was actually for me, which she then showed me towards the proper area.
Harps: Ended up buying something that looks like an anchor.
GN: …
Harps: It is actually called a “Deep anchor probe”
GN: …………
Harps: haha yup, I’m a pirate
GN: ………………..
GN: …an ass pirate
Harps: haha yup, with a 3rd peg leg hahaha
Harps: Some of the things were just super expensive, and I didn’t want something so expensive for my first toy. If in the event I didn’t like it
GN: so the anchor was the economical choice?
Harps: hahahaha, kind of actually. It was quite cheap
Harps: Plus the shaft had various sized “balls” on it. So you can work your way up in terms of thickness
GN: RaNdOm QuEsTiOn TiEm!
Harps: YAY!
GN: Fuck, Kill, Marry: Jesus, Gandhi, Buddha
Harps: haha wow. You’re making my brain think, this isn’t supposed to happen.
Harps: hahahahaha. Crap, ok one has to die
Harps: 2 can come back, soooooooooooo Kill Jesus, Fuck Gandhi and Marry Buddha.
Harps: God I’m going to hell. Hahahaha
GN: So.
GN: It’s late at night. You receive a phone call
Harps: Yes. Better not be collect.
GN: “What’s your favorite scary movie?”
GN: What do?
Harps: First I tell that asshole that I hate scary movies. Then I say Show Girls to go along with the trend. I head DOWNSTAIRS unlike all other people in horror movies.
Harps: I get my dogs out and head for the gun rack and knife drawer. Prop myself in a corner with a nice book and wait till I pop some skullz.
Harps: Clean the carpet and chop up the guy into bits and feed him to pigs. If this happens to be a survey on scary movies then I shall say Pitch Black as it is one of the only “scary” movies I’ve seen.
Harps: Now I’ve let slip that I’m a psycho as well. This interview is going swimmingly.
GN: Anyway, thanks for the great interview. It was awesome talking to you and shattering all the innocent perceptions that you had
Harps: I’m so sorry to everyone reading this right now. There is no Santa Claus!
GN: Oh wow, you just had to stab them with the dildo then twist it
Harps: That comment was way too random even for me. Hahaha it does have a handle! That was like a marathon interview

Discuss him in the forums