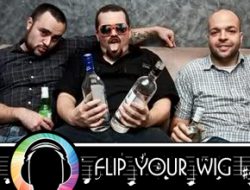 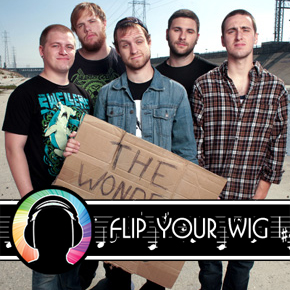 Flip Your Wig – The Wonder Years “The Upsides”

Welcome to Gay-Nerds first edition of Flip Your Wig, a (hopefully) bi-weekly feature on music made by GLBT people or their allies. For my first review, I wanted to find a record that could branch away from the confines of “gay music” but also be an album could resonate with any of our readers no matter what their identity. I couldn’t think of a better album than one of the few pop punk albums of the last decade that could actually save lives.

I was hesitant to listen to this album when it leaked in January. The Wonder Years were a sextet of goofballs from Philly who seemed to be bucking on the recent pop-punk revival for laughs. Somewhere along the way, the band dropped their gimmicky keyboards and got their asses kicked by real life. I was nervous when the faux four-track bedroom recorded vocals cued up, signaling the beginning of what I feared would be standard issue 21st century bloodletting. Oh how wrong I was.

In less than fifteen seconds, The Wonder Years shred any of the self doubt and teenage egocentricism found in the band’s earlier recordings before the rest of the band slams into action, attacking homophobes, social hierarchies, and general scum that clogs the life of the American twenty-something. Rather than revel in emo’s self-deprecation or pop music’s aimlessness, The Wonder Years provide a much needed realist viewpoint to their songwriting. Hundreds and venues and countless blown out tires, panic attacks, and full blown gang riots at shows, The Wonder Years trudged into adulthood. The system idealistic naivete of indestructible youth has realized that it needs support and self-care (Melrose Diner, Hey Thanks) and it sounds downright jubilant.

Musically, the band doesn’t try to rewrite anything that had made the pop-punk rulebook by the turn of the millennium. However, there are enough clever quirks and hooks that make each song memorable and distinct from one another. The band traded in off-tempo bridges that were barely held together by keyboard doodling for concrete, old-fashioned pop-punk that would make Drive-Thru records and should make Fueled by Ramen begin to think about finalizing another contract.

It is refreshing to find a band in any genre that takes a firm stance against the “FML” culture that views every inconvenience as a catastrophe. The Wonder Years understand that challenging these notions and working for the good in life brings about much more than deciding to mope about with your Bright Eyes records. I just hope the messages of self-reinvention and perseverance reach the masses.

But don’t just take my word for it!!!

“More than anything else, The Upsides is a record about fighting back. I felt like the past year left me and all of my friends defeated. Our early-twenties had beaten us down. We listened to sad songs and we watched sad movies and we talked about sad shit. It was like everyone looked at the rest of their lives and decided that now was the time to start being miserable. A lot of the lyrics for this record were written on my bike while I avoided traffic and bad parts of the city. Before we actually started writing songs, I had compiled a notebook full of the lines that I pulled from the fog my breath produced on all of my freezing, snowy morning bike rides. I had given up, and this was going to be a record about just that, and then, one day, I was riding my bike down 19th Street on the way to work and from the top of Callowhill, I could see that the fountain at Logan Circle had been turned on. Something clicked in my head and I guess it was because this meant it was Spring, or maybe it was just because it reminded me of happier times, but I decided then that it wasn’t okay to be this defeated at twenty-three. A few months later the band moved into the house I was living in South Philly with my girlfriend and roommate. They slept on the floor of our living room and every day we would wake up and walk down into the 15-square foot basement to write songs. We spent a very long, very hot month between May and June surviving on freezie-pops and Dunkin’ Donuts iced coffee alone. Everyone, literally and figuratively poured themselves into this record as we must have lost a collective ten pounds from sweat alone. My basement still smells terrible to this day. There were a few times when we walked upstairs after an argument and I didn’t think we’d ever come back down because every song was that important to every one of us. The result is a record that we’re all very proud of and that I think carries a very real message. The whole world wants you to be miserable. It wants you to put your head down, sigh to yourself and give up on being happy, and I know just as well as anyone that sometimes, giving up seems like the only option, but if you take one thing from this record, I hope it’s this: Don’t give those mother-fuckers an inch. Stand your ground every chance you get because everybody deserves a chance to be happy.”

Recommended if You Like: The Starting Line “Directions”, New Found Glory “Not Without a Fight”, The Swellers “Ups and Downsizing”

Like it? Can’t stand it? Bring it to the forum for discussion!

» Music » Flip Your Wig – The Wonder Years “The Upsides”