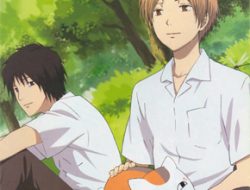 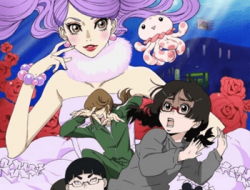 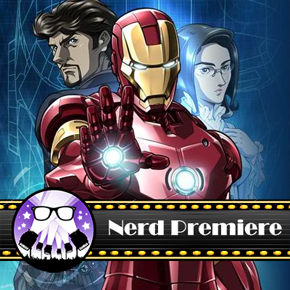 
Most of us know Iron Man, whether it’s through comics, movies, or the few short-lived cartoons that sprinkled our childhood:  he is an alcoholic, narcissistic, womanizing genius with daddy issues—the makings of all great heroes, tyrants, and anime protagonists.  Madhouse has placed Tony Stark somewhere in the future where Tony has humbled himself enough that he no longer wants to be Iron Man and is traveling to Tokyo to develop and introduce his solutions for free, self-sustaining energy and a global peace-keeping force in the plutonium–fueled arc reactor, and mass-market Iron Man derivative, Dio.  Unfortunately, the xenophobic Japanese aren’t receptive towards Stark’s arrival, and with the Zodiac using technology similar to Iron Man, Tony has his hands full with protecting a country that wants him gone.

Visually, the show looks like it’s made by Madhouse’s B-Team.  The character design has the production house’s signature thick black lines and non-cutesy style, but the sense of proportion is strange, leaving an unsettling impression when put to motion.  Rather than blow us away with the hand-drawn Iron Man showcased in the trailer, Tony’s titular armor is computer generated, as are most of the inorganic elements like automobiles, buildings, and the members of the Zodiac. The cg isn’t badly integrated, but because of the strange character design, interaction between the two elements is jarring and needs to be adjusted to.  So while the style isn’t bad per se, because the trailer was so different—and better, to be honest—feeling duped from the strong impression it left isn’t unjustifiable.

The feeling of being under-whelmed is exacerbated by Madhouse’s generic and uninspired port of the Iron Man:  it is made into a mostly episodic mecha with no more than a thread of a plot line connecting throughout.  With the inclusion of the Zodiac, the show takes a robot-of-the-week format wherein Tony tries to balance his business overseas with halting the terrorist activities of a mysterious organization.  And since Tony loves to chase girls, there’s room for that girl.  You know.  The annoying, slightly dumb, but very earnest chick who loves to follow around the protagonist.  She takes the form of Nanami Ota, a “scrappy,” young journalist looking to make a name for herself covering Stark’s socio-economic ventures in Japan.  As one would expect, shenanigans ensue:  while Iron Man soars through the skies, battling mechanical personifications of the 12 astrological signs, Nanami runs around, thoughtlessly placing her life in danger for a scoop, only to be rewarded by an uncouth invitation to dinner from Tony.  Tony gets slapped.  Rinse and repeat.

He wants your feature, Nanami.

So, Iron Man is dismally banal, an adaptation that sucks all of the fun from the comics, and isn’t anywhere near as over-the-top as some anime can be.  The show is, instead, an all too safe production that tries too hard to please everyone.  Tony is ripped away from all of the characters and relationships that help set him apart from other business tycoons in the comic-verse and is transplanted into what general Western audiences think of when they hear the word ‘anime.’  As a result, Tony’s character feels like it’s missing something very important, and the show misses the mark.  If this is a banner of what’s to come for the next three shows in the pipeline, time may be better spent elsewhere.
Seen Tony’s misadventures yet?  Discuss it in the forums.