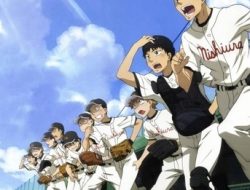 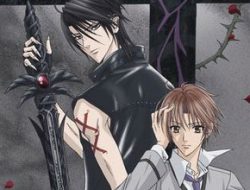 Next up in this series is Angel Beats; a show in which characters fight, post-mortem–in a high school, slice of life setting–the injustice of their death, rebelling against God, led by an obstinate girl with a traumatic past.  That’s what is said anyways. Our blank slate of a filter character is Otonashi.  He has no memories (supposedly having died a violent death), and is dropped into this ‘afterlife’ where no one can die, yet fight for some abstract sense of an existence they were cheated.  But are they really dead? What is the nature of Otonashi’s memories? Who is the girl called “Tenshi”?  How did she get there? We’re supposed to figure this out. The whole thing feels like The Matrix meets Key—the company responsible for semi-metaphysical, melodramatic harem properties like Clannad and Kanon—so you’re probably wondering why I would feature this in the first place.  Well, Otonashi frequently questions the sexuality of one if his comrades-in-arms named Hinata.  In actuality, they just friendly rib each other with slightly bromantical undertones.  But with each passing episode, I (as a viewer) began to seriously question the sexuality of not only Hinata, but the protagonist himself, Otonashi.  At the very least, Otonashi is compassionate to a fault.  But when he rushes past ‘dying’ characters that seem to be positioned to be his love interest for his bro, and then romantically embraces his emo, male enemy (the one responsible for his ailing friends), desperately acknowledging his right to a happy life, soaking wet in the rain, I really don’t know what to think.  Honestly, by the halfway point of the series, he has positioned himself to hook up with two guys more than Kanade (Tenshi/Angel) and, if I stretch it, the lead girl, Yuri.  But really, it’s just the two guys.
On the gay scale, I give this 3 frat bros out of 5.
The next show to be profiled will be Uraboku.
Comment here:  https://gay-nerds.com/forums/index.php/topic,70.0.html