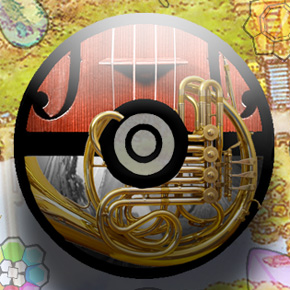 A Wild Pokemon Symphony has appeared!

Pokemon Reorchestrated is a wonderful project brought to you by Braxton Burks (AKA skotein) and Richard LaBrooy (AKA Seiiki). They take the musical pieces from the old school first gen Pokemon Red, Blue and Yellow  games and transform the nostalgic beeps and boops into full fledged orchestral arrangements.
They use instrument sample libraries from companies such as East West, Project SAM, audiobro, and Westgate Studios to achieve a realistic orchestral sound and tweak the final products with Logic Pro for sound engineering, and Finale for arranging the scores.
Skotein was awesome enough to give us a short interview.
How did you and Richard get together to start the project?
Originally I was working alone. I had seen other attempts at “arranging” the Pokémon music for orchestra over the years, most of which just constituted remixing the tracks with less-than-desirable-sounding MIDI instruments. Considering that the original 8-bit music was composed using only three channels and a percussion line while a real orchestra utilizes dozens of instruments, that was pretty unrealistic to me.
I was inspired by Zelda Reorchestrated’s project and decided that the Pokémon series needed to be done justice too. Luckily, Richard found me a few months into the project when he applied to contribute music for Pokémon Reorchestrated. His first demo was awesome, we got along great, and he had software compatible with mine, so I accepted him right away. Vermillion City is our first collaborative piece, and we will definitely be combining our music abilities for even more songs in the future.
What is your first memory with Pokemon?
My first memory of Pokémon was of this giant craze that had swept across the playground and consumed my friends around 1999-2000. I used to watch the Pokémon TV show on VHS back then, collected toys, and sometimes played with the trading cards, but my family was poor and preferred not to spend money on things like electronics, so I never owned a Game Boy or any of the Pokémon games for that matter. Several years later after my minor obsession with Pokémon faded, my friend Nic gave me one of his spare GBCs and a copy of Crystal. From then on, I was hooked!
If any Pokemon could be real, which would you want to have?
Oh, that’s a no-brainer–Charizard! My birthday is coming up on Monday, and when all my friends asked what they could give me, I demanded a Charmander, haha.
How often do you guys play videogames?
I’m not sure how much Seiiki/Richard plays games, but I have to admit that I’m not as devoted to gaming as I’d like to be. I read about games all the time in reviews, devour giant wiki articles on them, or sometimes play at friends’ houses, but I don’t have many consoles or enough time to sit down and play alone when I could be making music or something. I was barely able to squeeze HeartGold into my schedule by playing it on my DS while running on the elliptical at the same time (makes exercise way more fun).
Definitely worth checking out. Head on to http://pokemonsymphony.com/ for more details and for ways to download the music or to help out!
Join the discussion at: https://gay-nerds.com/forums/index.php/topic,158.0.html