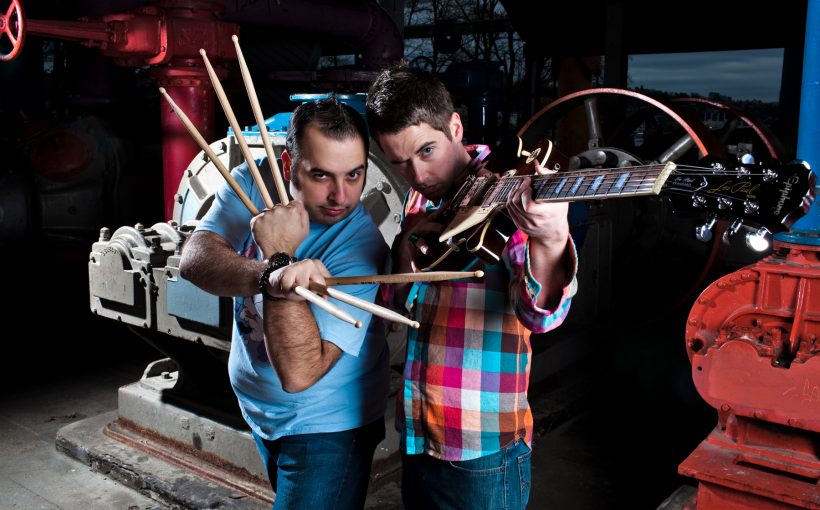 Kirby Krackle is one of the greatest bands of all time.  If you’re not listening to them, then shame on you.  No, this isn’t just bias because their lyrics are heavily comic book driven.  They also have songs about video games and old Saturday morning cartoons!  See, these guys have range!
Kyle Stevens and Jim Demonakos have been rocking the nerd world since 2009 with their self-titled debut album.  Their recent release (“E For Everyone”) even features a full music video for the single “On And On.”  I pulled up an e-chair and sat down with the duo as we discussed the video, their writing process, and various other nerdy things.  Hit the jump for the full interview!

When was the time you first realized that you were a nerd? And how did
that begin to work it’s way into your music?
Kyle: I think it was around the time my mom sat me down to talk to me about the concern she had with me reading comics and getting unrealistic views of women’s bodies. What? They all don’t look like Power Girl? Blasphemy! That said, after we talked last week she’s not too worried anymore.

Jim: For me, probably around college where everyone I knew was dropping their ‘nerdy’ pursuits like comic books, D&D, etc. and I kept on reading comics and playing video games. It’s not like I didn’t get interested in girls or the world at large, but I don’t see how you have to choose when you can pursue both.
I think that just the sum of experiences of growing up on these amazing facets of pop culture is where our major influence comes for all our songwritng.
The ability to make things like the Green Lantern oath work in a song is pretty amazing.  What inspired you to turn that into a song?  And what are some of your lyrical and musical influences?

Kyle: Getting caught up on an overlooked stack of Geoff John’s Green Lantern books sparked the interest after we realized how cool it was that he would write in the meter numbers going down as the ring was being used more and more. What would that be like to know you wield the power of a God as long as the battery didn’t run out? Cool to think about and we lucked out that people dug it as much as we did.
Lyrically, I like the mix of a vague poetic mix of words and straight to the point language. I grew up listening to people like Matthew Sweet, Eddie Vedder, and Snoop so I probably absorbed much of that subconsciously in terms of developing my own style. If you take a little from each person inspiration wise, then your toolbox from which to draw from grows and grows…
Jim: I grew up a Hal fan, GL was the only DC comic I read for a long time (I was mostly a Marvel kid) so the connection to that character is very strong and the song just flew out of us.
You recently debuted the video for “UP, UP, DOWN, DOWN” on Youtube. How did that come about? And what made you decide to create a video for a song from an older album as opposed to your current one?

Jim: We had contacted the Art Institute of Seattle last year, connected with their animation department and proposed a collaboration making use of our debut album as soundtracks to their final projects. That didn’t really work out, but some of the students ended up taking on the creation of animations based on our songs as side projects.
Because animation takes so long, especially for a single person to do, the video might have just been debuted but was in the works before E FOR EVERYONE was released, so you’ll see a few videos based off of album one.
We did just release a live action video/film based on ON AND ON from the new album, and we’re in the process of creating more videos, both live and animation, for more of our songs, it’s just a slow process but ultimately makes for a fun video and we’re cool with that.
Can you tell us more about the “On And On” video?  And how did that come about?


Jim: We’ve been friends with film maker Todd Downing for years and we
had talked about doing a Wolverine fan film or something like that
forever ago, just fun with a bunch of friends, specifically with JD
Green (who plays Logan in “On And On”) who we always joked was
basically Wolvie. It was mostly just talk, nothing ever happened and
we just let the idea fade away.
Fast forward to 2010, before we released E For Everyone (which
includes “On And On”), we had sent the song to Todd and JD to give
them a listen. They loved it and the old idea came up again, but
morphed in to combination fan film/music video. Todd and Dan
(Heinrich, the producer) started wrangling the pieces together, JD
went on a crazy workout regiment and then two weekends of filming, a
bunch of editing and boom, we have ourselves a video!
How do you feel about the “nerd rock” label?

Jim: We’re 100% down with it and wear it with pride. It’s what we are. We’re a nerd rock band, creating original rock songs based on all the nerdy pop culture that we love.
Are either of you guys single? (Our readers want to know!)
Kyle: I have a super cool girlfriend at the moment who is new to this whole world and kudos to her for jumping in headfirst supporting KK. It makes a difference, even if you have to explain to her parents what “teabagging” is and why you wrote a song about it. Awkward much?
Jim: I also have a rockin’ cool girlfriend – she even designed our website!
Let’s say the inevitable zombie apocalypse finally happens.  What do you do to survive?

Kyle: I’ve been thinking about this and would like to start stocking up on granola bars and Sobe. I’m not a big gun guy, but there is no way in hell I’m gonna be the only one without one and have to hold
Bubba’s pocket for protection if you know what I’m saying (you know what I’m sayin?).
Jim: I have no idea what Kyle is sayin’. Not just above, but really ever. I do feel like I need to get in better shape for the zombie apocalypse though, I’m not feeling too confident in outrunning them, especially if the zombies are the running kind. Not cool. I’m a pretty good shot with a handgun (a friend’s dad owned a shooting range when I was younger) so I think that might work out okay for me. I guess we’ll see soon enough!
What comics have you guys been reading lately, and what games have you been playing?
Kyle: I’ve been loving the BRIGHTEST DAY books for a few months now, and WALKING DEAD never disappoints. INVINCIBLE is getting my interest peaked again and just today I need to start catching up on years of X-FACTOR. As for games, the reason I’ve been playing catch up on comics is because RED DEAD REDEMPTION is making me lose all my friends!
Jim: I’m hooked on TRANSFORMERS: WAR FOR CYBERTRON. That is one fun-ass game, and with Peter Cullen doing the voice of Optimus Prime, I’m hooked. The animation in it is great, awesome story, just a solid game that doesn’t let go. I also dusted off ASSASSIN’S CREED II to finish it off before the new game comes out this fall (though I think I’m pretty much gonna be screwed time-wise as soon as FALLOUT: NEW VEGAS comes out)
As for comics, I read everything Kyle mentioned above, plus the GIJOE books from IDW (they’re really good!), DEADPOOL (the main one, not the miniseries’), CHEW and CHOKER from Image, the two Waid books from Boom! (INCORRUPTABLE and IRREDEEMABLE) and really too many to name, I read a lot of books each week!
What else are you both working on right now?  And how do you find time to balance between Kirby Krackle and your other projects?
Kyle: KK is a daily activity so we’re always scheming for out next step. Right now we just dropped our new video for “On And On” and prepping some cool new San Diego Comic Con exclusive schwag…
Jim: I’m also the Convention Director for the Emerald City Comicon in Seattle, so pretty much my days revolve either ECCC or Kirby Krackle. As for time balance, it can be tough, I’m a terrible time manager and just try my best to not let things slip through the cracks.
What’s next for Kirby Krackle?
Kyle: Whatever it is, it has to be something that if we weren’t in the band we would have to exclaim, “that’s freaking awesome!” We are fans first and foremost, and want to do nothing but make content that we get off on as fans that at the same time feels creatively good to us. We’ve been throwing new song ideas around and talking about the next year so who knows? We more than anything want to keep the KK ball rolling and keep enjoying the music and the fan response. -Much thanks to Kyle and Jim for taking time out for us!  You can catch up with Kirby Krackle’s tour dates, check out other videos, and buy their albums all on their website.
Join the discussion! https://gay-nerds.com/forums/index.php/topic,229.0.html

Tags: Comics, Green Lantern, Interview, Kirby Krackle, Nerd Music, On And On, Rock, Up Up Down Down, Wolverine