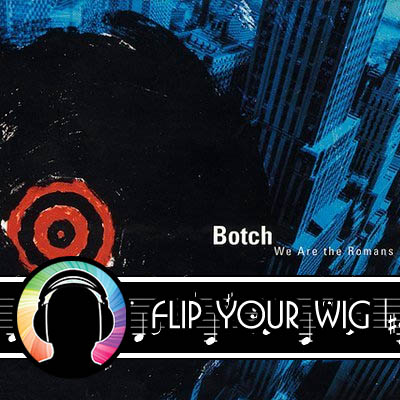 Welcome Gay-Nerds’ biweekly highlight of music from members of the GLBT community and their allies. Since I’ve been writing this column, I’ve found it increasingly more difficult to keep my inner fan in check while I write. This frustration is almost at a boiling point as I look back on Botch’s ridiculously influential “We Are The Romans”. The modern metal masterpiece has been stolen from and bastardized more than nearly any other document in heavy music over the last decade, even by bands who have probably stolen it from second hand sources (even subconsciously). However, I promise, dear readers, I will keep my anger towards those thieves in control as I review this; hopefully someone, somewhere will notice these crimes, stand up, and beat the hair product out of those gold digging swindlers.

Botch should not have made the impact they had. They made two quick albums in three years and dissolved into relative obscurity until file sharing began to push this little cult band into the ears of kids looking for an alternative to Linkin Park and other like minded gorilla rock. In retrospect, I’m surprised Botch ever made it out of Washington. While a lot of chaotic music was bubbling underneath the wave of Korn clones, nothing sounded quite this meaty. Sure, Converge were screaming and crying up a storm on the East Coast and the Dillinger Escape Plan were forcing people to run to their slide rule to figure out what the hell was going on between beatdowns and Mike Patton inspired bridges, but Botch was different.

Botch wrote unrelentingly thick, meaty slabs of reverb that provided ample room for intellectual shouting matches. On first exposure , it sounds like a simple wall of sound, but repeat listens will reveal mind-erasing guitar lines and pinpoint drumming that only the most dedicated could hope to cover (“Smoke on the Water”) this ain’t. The band were also more concerned with issues beyond the typical metal and hardcore (sorry, metalcore (wait, mathcore?)) trappings. “I Will Be A Sex Symbol on My Own Terms” pleads for people to cast their notions of beauty aside for their own mental well being, while dustings of eastern philosophies and the work of J.G. Ballard can be found throughout the album. So shortly after releasing We Are The Romans, Botch broke up and people went on to do their own things (Minus the Bear, Russian Circles and These Arms are Snakes being the most notable). Meanwhile, many bands have noted Botch in their own work. Some have been more forthright (Thrice, Norma Jean) while others took a while to fess up. I guess plagiarism is the sincerest form of flattery, but I doubt the members of Botch really care. They set out to kick ass and have fun while they could. The fact that hundreds of bands steal from them now claiming a source of inspiration is just an odd “bonus”, right?.

Recommended If You Like: Cave In’s “Until Your Heart Stops”, Every Time I Die “Hot Damn”, Norma Jean’s “The Anti-Mother”

Like it? Loathe it? Bring it to our forum!