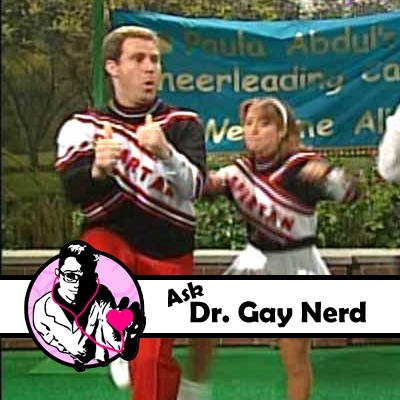 Dear Dr.Gaynerd,
I’m as tall as a 5 foot and 9 inch tree, athletic, goofy, bubbly, and somewhat of a flamer. But this is where the problem is, Dr! I’m confused about my sexuality!

Let me start this off and give you all the information. In 9th, 10th, and 11th grade I went to the same school. I hooked up with and dated a guy , we made out, I have taken and given oral sex, and we generally had a good time. But I have also dated girls in the past, and I liked hanging out and hooking up with both the guy and the girl. People at this school knew about this, including all the girls that I cheered with, and everyone was fine with it. But now for my senior year I am at a new school, and they haven’t heard any of my stories about hooking up with guys.

I feel like I am lying to the girls in my current school, by not telling them about my past with guys. But at the same time, this school isn’t as accepting as my other school was. I don’t care what people think, I’m a male cheerleader in highschool for Gods sake, but I feel wrong telling the girls I cheer with that I am straight. When I could see myself settling down and marrying a guy later in my life, it becomes tough.

I don’t want to come back to the reunion and introduce my ‘life partner’ to the crowd. It wouldn’t shock people, I have fashon sense, I cheer, and I am adorible, but that’s not how I want my life to be! I want everyone to know how I feel, but not be off putting for girls that I want to date into the future.

My problem is this, I know I like guys, and girls. But, at this point in my life, I only see myself dating girls because its high school and the dating pool is small. Once in college and the real world, I most likely will only date men. Do I ‘lie’ and tell the girls I am “100% straight,” or do I tell them that I am only “currently straight?”

I think you’re putting the cart before the horse a little bit.  You fully admit that you’re confused about your sexuality and that’s okay.  I don’t see why you need to slap a label on yourself just yet.  Just do what feels natural to you right now and everything else will fall into place.  I wouldn’t be too worried about the reactions people are going to have at your high school reunion.  That’s pretty far off and truthfully, everyone that you know now is going to do a lot of growing up and changing over the next 10 years.  Time has a funny way of putting things into perspective and by the time your reunion rolls around, the same people who might not be accepting now will find that they just don’t care and that they kinda knew it all along anyway.

You also indicate that you feel dishonest because you haven’t volunteered the details of your bi-curious history to the girls that you now cheer with.  Being honest is important, but honesty is not synonymous with full disclosure.  Your history with other guys has nothing to do with your position on the cheering squad now and it doesn’t affect the performance that you’re giving with them.  I see no need for you to volunteer the fact that you’ve dated both guys and girls.  In fact, doing so may be a little off putting to them since they’re not as accepting as your old school.

What I suggest is that you wait until they actually ask you about it.  You’re not lying by not volunteering your past on your own and when they do end up asking you if you’re straight, tell them the truth by saying, “I don’t know.”  It’s an honest answer.  You like both men and women, but you’re not really sure what you’re gonna go for.  Admitting that you’re bi-curious without actually saying that leaves the door open to swing either way without forcing any sort of commitment to uphold.  It’s also not quite as threatening a label to others as “bisexual” might be.

If you’re worried about how they might take it, make a little joke out of it.  “I’m a male cheerleader, of course I’m confused!”  People who can laugh at themselves take away that power from others.  Considering that you are a male cheerleader at school, however, I have a feeling that things may not be all that bad.  At the very least, you seem to have a strong sense of who you are as a person.  Screw the labels of sexuality.  You are who you are, you like what you like, and you aren’t going to let anyone stand in your way.  Go live your life with your head held high and find that perfect cheer.