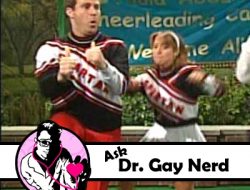 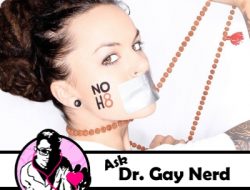 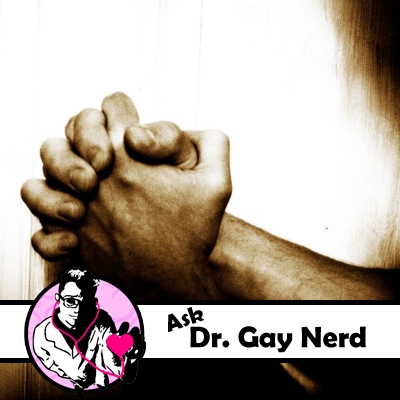 Ask Dr. Gay Nerd: How Do I Handle My Religious Cousin?

Dear Sir, or Madam,
I have a cousin and her boyfriend who means well in trying to help me “see the light.” She is a pushy religious girl who sees her way the only way and thinks she needs to help me be come a better “Saint.” I want to respect them and there believes, but I am trying to find a none agument leading to “hand to hand combat” between the two parties. Please help me defuse a bomb before it blows.

Sincerly thine, the shadow not in a closet

It’s incredibly frustrating to have to deal with people who not only think that you’re damned to Hell, but who feel that it’s their own personal mission to save you from that fate. The problem with this situation is that you can’t appeal to these people through typical logic or emotion. You have to go to their level and use their own tools to give them something to think about. There are a number of resources out there which reconcile being gay with Christianity and I have included a list of them at the end of the article. I highly suggest that you look into them. Your cousin is reaching out because she wants to change you. But why is she doing this?

Try to remember that she’s doing this because she cares about you, in her own way. If she didn’t give a damn, she would have given up this fight a long time ago. This is a battle which has been brought to you, one that you must persevere through. The good news is that you have a chance to help open your cousin’s mind and show her what love is really like.

Until your cousin comes to terms with your homosexuality, this is going to be your cross to bear. I’m not sure what the interactions between the two of you are like, but I can speak from personal experience regarding situations like this. If her words make you upset, she’s going to think that on some level she’s getting through to you, that there’s something inside of you which agrees with her and that’s why you’re becoming distraught. The more uncomfortable you appear around her, the harder she’s going to keep pressing. These two things aren't incompatible, despite whatever others may think.

Of course, if being around her truly is that unbearable, you could break all ties and walk away, effectively cutting her out of your life. While it removes the symptoms, the problem will still remain. A messy situation and hurt feelings will be present on both sides. Honestly, this may be the only course of action that you truly have, in the end. I challenge you, however, to try to open her mind. Your cousin hasn’t given up on you. Maybe you shouldn’t be giving up on her, either.

As for more resources, I suggest you look into the true meaning of the Sodom and Gomorrah story as well as works by John Boswell. There are many gay Christian websites  out there which can help you identify and decipher scripture passages which are useful as well as books written specifically for gay Christians. I don’t know where your own personal spiritual beliefs lie, but knowing the information wouldn’t hurt either way. Go with grace and make a difference.

» Advice, Forum » Ask Dr. Gay Nerd: How Do I Handle My Religious Cousin?