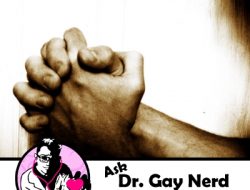 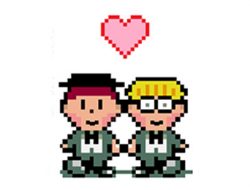 Gay Marriage and You. What Now? 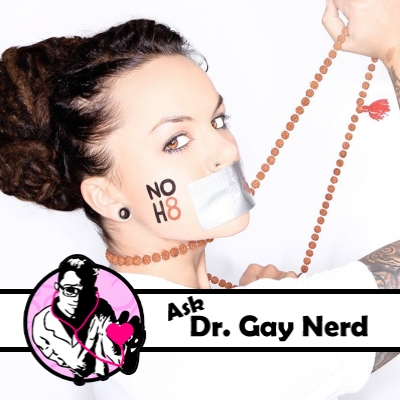 Ask Dr. Gay Nerd: What Should I Do About My Closeted Girlfriend?

I’ve been dating my girlfriend for almost a year and four months now. At the very beginning it was kind of awkward for us because not only had we never dated any girls, we’d also never anyone. She was the first girl I’d ever liked, and she still claims I’m the only girl she thinks of like that. I’ve never really had a problem coming out. As soon as I knew I liked her, almost all of my friends knew. None of them cared. Then, after we’d already been dating for nearly five months, I decided to tell my parents. They said they already knew. Then my girlfriend started freaking out and thinking that she had to tell her parents. I assured her that she didn’t have to until she was ready.

Even after that, I’m pretty sure it was only a few weeks – I don’t remember exactly how long it was – before she told her mom. While they were at the dentist. Her mom freaked out on her and said that she was lying to me and that that wasn’t how she was. She said that she had to think of her reputation, and that by saying she liked girls she was killing it. She said that she shouldn’t be labeling herself so early in life (being that we were only freshmen at the time.), and I agreed with that statement and that statement only. I’d never pressured her into labeling herself, even if I’d already declared myself bi-curious at the least, and she hadn’t labeled herself. She was still confused as to what she was.

After her mother calmed down, they didn’t talk about it. Her mother had already hated me before and this really didn’t help, so between then and the next incident I’d only been over to her house once because we didn’t want her to freak out again. Something like a month later her mother asked how things between us were going, and she said that we’d broken up and that I was into some guy we knew.

At first, I thought I was fine with it. It stung a little, but I could deal with it if that was what made her comfortable. As time went on I felt myself become more and more frustrated with the whole situation. I started thinking things like, “How dare she say that she was lying to me!” and “Why would she say we’d broken up? Does she want to break up? Do I not make her happy?” All of this was already happening at a slightly stressful time for me, so I was kind of stressing out, but I didn’t want to upset her, so I didn’t – and still haven’t – confronted her about it.

As I said before, I want her to be comfortable, but it hurts that I have to hide how I feel about her, even if just to a couple of people. To make it worse, when I was staying at her house towards the end of the summer, her brother saw me do something – can’t remember what it was now – and told her mom. She covered it up and her mom just kind of brushed it off at the time, but later she said that she didn’t care if we were dating or doing whatever as long as her little brother didn’t know. She refused to bite, so her mom stillthinks we’re not dating anymore.

It’s coming up on a year since the whole thing started, and I’m really cracking up on the inside. I don’t want her to feel like she has to come out to her mom all over again, but at the same time I don’t think I can keep doing crap like this. I love her, and I realize that if her mom knows and doesn’t approve I might not be able to go over to her house anymore, but I really can’t take it anymore. Maybe not the best way to come out to your mom... but you get points for creativity!

Based on reading your letter, I feel like you are very mature for your age and I want to commend you for that.  It takes a lot of people a long time to gain the perspective that your maturity has already afforded you.  However, your maturity is also going to lead me to give you my honest opinion of things because I think you’re going to be able to handle it.

One thing that my life experience has taught me is that when you date people who are in the closet, these refusals, denials, and lies are a common part of your life.  No one should be forced to come out of the closet before they are ready to, though that often comes at a cost of lying when some questions come up.  When someone in the closet starts to date someone who isn’t, the out person ends up having to step a little bit back inside to accommodate their partner.  That’s not something that everyone can do.

You sound like someone who is very proud of who they are and that’s a wonderful thing.  Your partner doesn’t sound like she’s quite there yet, though.  Will she get there eventually?  I’d say there’s hope, but these things take time.  Until she’s personally ready to take that step, there’s nothing you can do.  I’m more worried about your emotional health in the meantime. This is something she needs to do on her own.

If hiding how you feel about her is hurting you, that pain is going to continue to fester.  Personally, I have a rule to never date someone closeted again, because the pain and emotional turmoil that you go through as an out person is just too much to handle.  Yes, there are some wonderful people that are still in the closet who deserve to be loved, but until they’re ready to proudly take their place by your side, you shouldn’t have to hide who you are to make them more comfortable.

That being said, you can’t force her to come out of the closet for you.  This is something that you already know, but she needs to come out of the closet on her own terms.  I know that you love her, but I’m afraid that the two of you are in totally different places.  You’ve accepted who you are and embraced that person proudly.  Forcing yourself to go back into the closet for her sake isn’t right.  Though it’s no fault of your partner’s, you’ve grown faster than she has and repressing that growth for her sake isn’t healthy.

This situation absolutely sucks, especially going through it at your age.  However, trust me when I tell you that you deserve the self-respect to hold your head high and not let anyone else dictate the terms of how you live your life.  Love is an important quality of life, to be sure, although loving and respecting yourself is just as vital as having that from another person.  When you look back on your life in 10 years, will you be prouder of making a choice for continuing to hide how you feel to keep a girlfriend, or by having the courage to live your life being completely true to yourself?

» Advice, Forum » Ask Dr. Gay Nerd: What Should I Do About My Closeted Girlfriend?