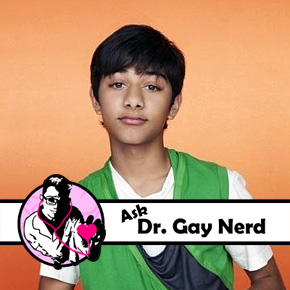 -Am I Wallace or Scott? You should just call a spade “a spade.”

First of all, I’m sorry that your friends are being ignorant like that.  I’m not sure how old you are, but being a gay teen is never an easy thing and I wish you didn’t have to deal with anyone making it even harder for you.

Secondly, your friends have no idea what they are talking about.  The next time that they say something like, “How do you know you’re not straight if you’ve never been with a girl?” I suggest you reply with exactly what I tell people who say the same thing to me:  “How do you know that you’re not gay if you’ve never been with a guy?”  That’s always shut them up for me and it’s even sometimes opened their eyes into understanding LGBT people a little more.

You know that you’re gay because you have a sexual attraction to other boys.  Your sexual orientation is defined by what you like, not by what you don’t like.  I know plenty of straight men who have had sex with a girl and didn’t like it.  That doesn’t make them gay, it just means they didn’t like having sex with that girl.  If you aren’t attracted to girls, having sex with one isn’t going to change that for you.

But maybe you are attracted to girls.  That’s okay because you can be bisexual; there’s nothing wrong with that.  Maybe you’re even someone who hasn’t felt a sexual attraction to anyone yet in your life and, as of right now, you have an asexual leaning.  That’s okay too.  The point is that you shouldn’t define your identity based on rigid ideas of what it means to be homo, hetero, or bi.

If you’re a boy who is attracted to other boys and you feel okay with calling yourself gay… then I’d say it’s a pretty safe bet to say you’re gay.  You are who you are and you like what you like and that’s what identity is.  Don’t let anyone else tell you what you are because you are the only one who is living your life and you should spend your time and energy trying to make yourself happy… not trying to conform to someone else’s ideals or trying to prove a point.