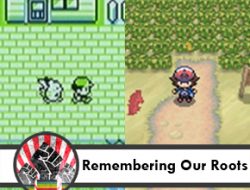 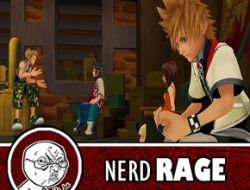 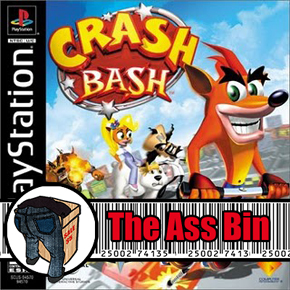 Not everything that can be found in the Ass Bin is crap all the way through. Sometimes a piece of gold, or in this case a piece of wumpa fruit, can be found buried deep beneath layers of poor decisions, bad timing, and lazy development. Crash Bash stood defiantly against the Mario Party series and gave the best alternative four player party game for the Playstation, yet tragically fell short of amazing. This week’s edition of The Ass Bin brings you a heartbreaking tale of a platforming hero from another age that fell from greatness and into the dregs of the video game world – party games. What version of Pogo Panic is this? No one will ever know, and that's the problem. No matter what difficulty, bumper soccer is always annoying.

Crash Bash is fun. Let’s get that out of the way right now. Crash, his sister Coco, and the other mildly beloved cast of the Crash Bandicoot series came together for mayhem to determine the fate of…everything, I suppose, by fighting for the vaguely defined forces of good and evil in this universe – the good witch doctor Aku Aku, and the evil witch doctor Uka Uka.
While working through the team based struggle for control over the universe, tons of challenges and collectibles were pelted at the player as a reward for slogging through the seven minigames under constantly updating sets of rules. None of the games fall into the Mario Party trap of “Hit A to win,” constantly challenging the player to get better in skill based games with far more substance than the typical minigame.
Oh. You already beat this minigame the first time through and got the trophy? Try it again and pick up the gem, or the crystal, or the difficult gold relic, or perhaps even the controller crushingly hard sapphire relic. And then move on to the next warp room and do it all over again.
And that’s where the dagger slips uncomfortably between the ribs of this would-be great. Although the minigames are fantastic, the graphics live up to the high standards the Crash Bandicoot series set for the Playstation One, and the controls enable quick pick-up-and-play for groups bigger than four sharing the fun, facepalm worthy issues hide around every corner.
Want to get all the challenge rewards for each of the seven minigames? Putting aside for a moment the fact that the game has only seven minigames while Mario Party had over fifty in the first game (facepalm), there are five different warp rooms each featuring the same games (facepalm) and each one has five collectables. So to get everything for just one minigame means trudging through hours of gameplay for twenty-five items (facepalm). Get ready to see this. A lot.

No, sorry, sumo wrestling-ish and tank warfare games are just not that interesting. Snaps for effort.
Nevermind, give me those snaps back. A pedigree as successful as Crash Bandicoot (up to that point before a series of developers could screw up Naughty Dog’s legacy) deserves the proper chance to stand against the Mario empire. Crash Team Racing took the best aspects of Mario Kart and Diddy Kong Racing and reworked them to create something original and fun that fit easily into the already existing franchise. Crash Bash, however, refuses to accept successful party game conventions such as game boards and direct competition outside the minigames (facepalm).
Those missing breaks from the action turn out to be essential for frustration relief, as Crash Bash players quickly discover endless punishment that would make From Software, developer of the infamous Demon’s Souls, proud. But unlike most games with difficulty curves resembling Mount Everest, nothing in Crash Bash gives the player an edge, instead continually adding rules adjustments to make players throw their controllers against the wall, floor, and every other surface in sight (facepalm).
In fact, while the seven minigames are all distinct, each new game room only adds continually eyeroll worthy rules and a reskinning of the game environments (facepalm). No, a game where players mark floor tiles and break boxes to score points is not different from a game where players mark floor tiles and enclose an area to score points. A few more days in development, and developer Eurocom might have realized that. RIP, Crash.
Recommendation: Every gay geek under the sun. This is a good game, it just falls short of being the great, series starting game it should have been. The full experience waits for you in all of its soul crushing glory on the PSN. Come, play, and sob with Gay-Nerds at what could have been.
Did you play this game when it came out? Ever actually gotten one of those damn sapphire relics? Talk about it in the forums!