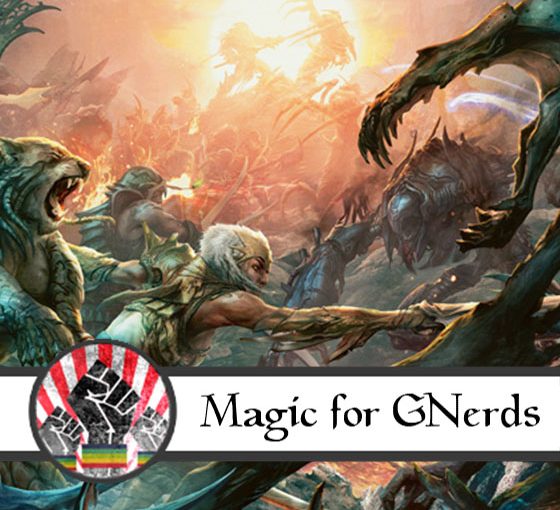 Drafting with the new Mirrodin Besieged set can be quite the moral challenge. Should you take the side of resistance and build up an army of knights and artifact creatures to bulwark the lands against infection, or put together a team of zombies and traitorous Mirrans to spread the Phyrexian disease? I’m not here to judge our gay geeks and lesbian nerds either way (as long as we all fight for Mirrodin, that is), but a bit of GN experience from prerelease events this past weekend will help give you an advantage at your next Friday Night Magic.

Lets start with everyone’s favorite set mechanic, infect, and how it can drain the life from your opponents. With infect’s ability to deal what roughly equals permanent damage to creatures, it was surprising to find draft decks having a tough time poisoning players to death. Though a fast start could signal doom for an opponent through quick drop creatures like Vector Asp, infect seems much more suited to a supporting role in draft for clearing out blockers so other monsters could bludgeon players to death rather than racking up poison counters.

A quick drop to start the spread of disease.

But this is a fault of drafting, not infect. As constructed play has shown in the last few months, infect clearly works just as well as everyone was afraid it would when given the right support, and that’s the missing part here. Drafting, a format much more reliant on massive creatures and single cards with overwhelming effects rather than combos, does not normally give the chance to support infect as a standalone strategy.
With artifacts gaining a huge boost through creature generator cards like Master’s Call and Thopter Assembly, the scales seem tipped away from infect at the moment with one exception. Flesh-Eater Imp gives you a boostable flying creature with infect, quickly racking up poison counters on opponents in exchange for a few of your own creatures. On the whole, infect is incredibly useful in draft for breaking defenses (ignoring darksteel, regeneration, and instant defense boosts), but decks relying too much on the mechanic tend to struggle.
Speaking of Master’s Call and Thopter Assembly, these two cards provide exactly what artifact decks were missing – overwhelming numbers. Master’s Call lets Myr finally be a viable tribe when used together with Myrsmith for more tokens and Myr Galvanizer to give a power boost, and all three can be easily found during a draft.
Thopter Assembly can win you the game by itself, providing a 5/5 flyer that bounces back to your hand after one turn and gives you five 1/1 flyers. And then you play it again. The threat of ten flying damage per turn may cause players to give in and scoop early. And guess what? Thopter Assembly is the promo card for launch party events this weekend, which is quite a nice bonus for your collection should you choose to go. Artifact hate in draft has never been more important than it is for destroying opposing assemblies.

But thopters aren’t the only flying creatures, like Leonin Skyhunter, that will let you rise above defenses and strike your opponents directly, ending many draft matches quickly. Quick flying creatures can’t be stressed enough. Glint Hawk continues to be a powerful creature from Scars of Mirrodin that you’ll want for artifact decks, as the “drawback” of returning an artifact to your hand lets you toss aside those pesky -1/-1 counters you’re bound to gather from increasingly common infect abilities.
Or you could combine Glint Hawk with Shriekhorn to put the artifact back in your hand and refresh the counters used to mill your opponent once you cast it again. When a deck is only forty cards tall, milling six cards will hurt, but twelve can be crushing. Just be careful you don’t ruin a metalcraft effect you were counting on! Speaking of metalcraft, Mirran Mettle is a great draft card to boost creatures +4/+4, especially when using infect. Finally, Lead the Stampede is a relatively cheap way to simultaneously put creatures into your hand while clearing out cards you won’t need. Green players would be foolish to ignore this sorcery.

An excellent way to strike a draft deck's real weakness - its size.

As with any set, there are many more cards worthy of mention than time allows, and remember, these are just the experiences of the staff at Gay-Nerds.com. Think we left out something important? Wanna share your experiences? Wondering why red and blue cards seemed to be missing from the spotlight? Talk about Mirrodin Besieged and drafts in the forums!