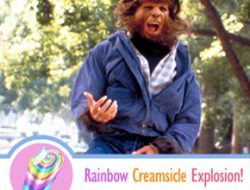 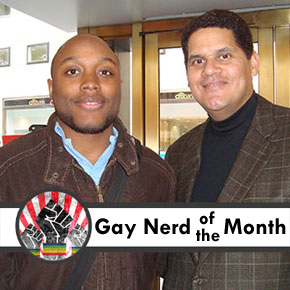 GN: Congratulations noteDhero on being April’s Gay Nerd of the Month!
DJ: YAY!! Though my ego is in love with this, I still feel slightly undeserving.
GN: You’re crazy. Everyone loves the noteDchan.
DJ: I’ll get you for this. You know it.
GN: And I’m sure you’ll do it in such a kawaii way
DJ: See, in real life, I could punch you and this would be over. But on the internet, I’m powerless.
DJ: Why am I so weak at Gay-Nerds?
GN: The lack of pocky?
DJ: No. I draw my strength from bento boxes.
GN: I’ll be sure to include more of those around the site. Maybe something kawaii like this
DJ: Is that Totoro? This is a failure, since, as I’ve said before, I don’t suck at Hayao Miyazaki’s teet.
GN: Damnit noteDchan. I’m supposed to make you look nice and approachable to our readers. Now you’ve pissed off like half of them.
GN: So whose teet do you suckle then? Kubo Tite?
DJ: OH HELL NAW!
DJ: Fuck Bleach. Fuck him.
DJ: I guess if I had to pick anyone in anime/manga…it’d be Naoki Urasawa…but then Master Keaton wasn’t as good as it should have been. I try to remain as objectively objectionable as possible about everything. Which just means I like to bitch and argue.
GN: Opinions are nice. Sort of why a lot of your articles have some of the most comments
GN: How did you get on board with Gay-Nerds anyhow?
DJ: Well, last May, I was approached by this skinny twig of a man to join a website. I very much believed in this guy’s vision/ideas, so I wanted to be a part of the gravy train and joined. I wanted to be his first member, but unfortunately, I was beat out by a few minutes. So I had to settle for number two. I’d like to think that’s my place here.
GN: Shout out to Bloodie! Hahaha. It was all a matter of quick typing
GN: Plus, I think you weren’t actually online when I opened everything up
DJ: Oh yeah, I might not have been….
DJ: I really don’t remember anything besides being pissed that I wasn’t first.
DJ: This was all over pms…
DJ: I remember.
GN: Like 30 or so minutes after, as I recall…
DJ: Can’t you just go in and make me first?
GN: Maybe.
DJ: HEAR THAT, BLOODIE!! I WIN!!
GN: Only if you admit that you are noteDchan and you are super kawaii. Then take a picture of yourself smiling and doing the peace sign.
DJ: That’s so absurd I feel like I have to do it.
DJ: I’ll puff out my cheeks too.
GN: The power of kawaii compels you.
GN: where did that nick start anyway? I mean, you were always the resident anime guru but no one coined any nicknames for you
DJ: Didn’t you start it?
DJ: Or maybe it was Dee on the podcast?
DJ: It was Dee.
DJ: You just ran with it.
GN: Yes. Dee. Not me.
DJ: She’ll get the unicorn head in her bed. GN: Anyway, time to get to know you more. What exactly do you do when you’re AFK?
DJ: Well, right now, I’m a barista in NYC bumming around and trying to be an actor.
DJ: It’s quite unglamorous.
GN: Sounds like the start of a comedy series or a lifetime movie
GN: You would fill the niche of the token gay guy and the token black guy
DJ: Someone wants to do a reality show about us. I’d be exactly that. Bitchy, black, and sassy.
GN: And the whole story would revolve around Hayden Panitierre or something
DJ: “Gurl, you just got to keep yo head up.”
DJ: That’s the tag-line.
GN: Hmm. Needs more ghetto fab.
GN: Perhaps some z-snapping
DJ: I was just about to say that.
DJ: Or a “smh”
GN: what’s that?
DJ: It’s what colored folks use to indicate that they are shaking their head.
GN: I don’t get it. I think I’m the wrong shade of brown or yellow.
DJ: That’s ok. The dark brown people feel me.
GN: Man, this interview is racially charged.
DJ: Somehow, I always take it there.
GN: Anyway, what are your hobbies?
DJ: Hmmm, the list is long. Watching tv/anime/movies, reading books/plays/comics, drawing, playing video games (though I’ve neglected my pretty PS3 recently), listening to music/podcasts, and arguing with people. I think that covers all the bases.
GN: Oh yeah, you did do a couple of drawings way back when
GN: Pretty good stuff
DJ: Danke. It’s amateur good, but not good good. It’s relaxing to get those kinds of ideas out of my head every now and then.
GN: What was your first nerdery as a kid?
DJ: Oh wow. To be honest, I was hit on all sides when I was little. My babysitter was hardcore into Romance of the Three Kingdoms on the NES, watched VHS’s of Ronin Warriors, my mother and aunt were crazy about Pac-Man, Galaga, and Super Mario Brothers, I’d play Contra with my dad and brothers, and when I was alone, I practiced drawing by looking at comic books. I’d say this was all around/before kindergarten.
GN: Haha, no wonder you’re so passionate about these things
GN: What’s the nerdiest thing that you’ve ever done?
DJ: I hate questions like this because I never feel nerdy enough. Besides being a part of this website, I think it’s a tie between trying to start a comic in the fourth grade about a time-traveler, dragon, and alien; and when I participated in a speed-read/quiz of the Harry Potter books with some friends a few years ago. GN: That’s pretty nerdy haha
DJ: Is it? They seem really tame to me.
GN: Well, it wasn’t sports so I think it still ranks somewhere on the nerd totem pole
DJ: HAHAHA, good point. Me and sports didn’t really get along until around college. I guess that’s when my hand-eye coordination finally settled in.
GN: Haha, how so?
DJ: Well, In the third or fourth grade, I played machine pitch (baseball). Somehow, while being catcher, I got a black-eye when I missed the ball. When I tried basketball in the fifth grade, I was always on the bench. When I tried out for track in middle school, I almost passed out because I was in such treacherous shape. Clumsy, and awkward is how I roll. Plus, I would have needed prescription goggles, so maybe it was all for the best.
GN: So I assume you got better at being a catcher in college?
DJ: Of course! wink, wink, nudge nudge
GN: Hahaha, oh you.,
GN: ANYWAY, RaNdOm QueStIOn TiEm!
DJ: Shoot!
GN: Favorite Pocky flavor?
DJ: Chocolate? I’ve never had Pocky.
GN: Bad weeaboo. Bad
DJ: That’s because I smart enough to know that ‘otaku’ isn’t a positive descriptor.
GN: Alright next!
GN: You are forced to have one of the following 3 things: Bobobo’s hair style (not the powers), Goku’s hair cut or perma neko ears. What would you pick?
DJ: Well, since I’ve already done the afro in high school, and can buy cat ears if I every wanted them…I’ll have to go with Goku’s haircut. I still think it’s kind of cool.
DJ: But the Super Saiyan 3 hair cut.
GN: What would you rather give up, pastries/baked goods or anime/cartoons?
DJ: This is like Sophie’s Choice.
DJ: I might have to give up anime, since I feel like I’ve seen them all, 500 over 500 shows/movies.
DJ: I swear I was trying to make that easy for you.
GN: Haha
GN: Well, it’s been great interviewing you
GN: Congratulations again on being the Gay Nerd of the Month for April!

Discuss about him in the forums!