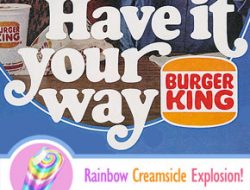 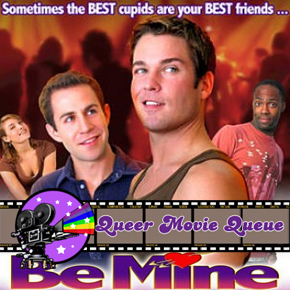 In honor of Valentine’s Day, today’s review is of the gay RomCom, Be Mine. This review was rather tough because, quite frankly, this movie is awful but I can’t quite bring myself to hate it.
Pop quiz time! Hypothetically speaking, let’s say you go into a café or a Starbucks or whatever and get in line. You get to the front and you order the last piece of, I don’t know, iced lemon pound cake. The person in line behind you let’s out a sad moan. They also wanted the last piece of lemon cake! (And who wouldn’t? That shit is the bomb.) What do you do? Do you (a) ignore them, (b) offer a weak but sincere apology then go on your way, (c) offer to split it with them, or (d) lie and say it’s actually for your sick grandma? If you chose D then you’re either a compulsive liar or the writer of Be Mine, maybe both. Hey, do you mind if I eat this thing I just bought?

Be Mine, like every other gay romance movie, is about a boy who’s looking for true love, not just random hookups. You’d think that after one billion movies with similar set-ups, the characters in said movies would stop acting like they’re part of some severe, persecuted minority. Yeah, I get it. You’d rather talk about your feelings than have sex with anyone. Congratulations, lesbians have only been doing that FOREVER! But I digress. The hero of our story is Mayson (Dan Selon), and he is so pure that he’s never even kissed a boy. He has, however, kissed a girl. His BFF Robyn (Kendra Thomas). The movie is rather vague on what, exactly, their relationship was before Mayson came out as gay, and there’s the occasional hint that Robyn’s feelings aren’t purely platonic. Sadly, what could have been an interesting plot development never goes anywhere, and instead we see Mayson fall for the supposedly straight Reiley (Jared Welch). The pop quiz scenario is actually how Mayson and Reiley meet, except in the movie it’s a scone that causes all the trouble, not a delicious piece of iced lemon pound cake.  See, Mayson has a thing for chocolate chip scones. The café scene takes place, like, five minutes after he’s eaten one and he’s already jonesing for another.  In fact, one of the first things he does at the movie’s requisite Valentine’s Day party is ask where the scones are.  This isn’t some “Mayson is lame/out of touch” thing because there actually ARE scones at the party. Now, all the characters in this movie might look like they’re thirty-five, but they’re supposed to be in college and this is supposed to be a bangin’ college party. There’s drug deals going on at the front door, naked people in the Jacuzzi, and, uh, delightful British quick bread being served as refreshments.  Oh, and ten bonus points if you can guess who’s absconded with the scones. This party is off the chain.

It’s Reiley. And OMG aren’t he and Mayson perfect for each other because they both…like…scones?  But it’s not just that! Reiley totally gets Mason and his desire for romance, you know? Well, actually Robyn’s the one that totally gets Mayson since she’s the one who divulges all of his intimate secrets to Reiley in the first place. Now, I may be wrong, but isn’t the whole point of dating the getting to know someone part? Getting the Sparknotes version secondhand doesn’t really seem romantic to me.  I guess my definition of “romance” is different from Mayson’s (as are my definitions of “creepy,” “intrusive,” and “gross betrayal of trust”) because he falls for it, and one year later, he and Reiley get married. That’s not really a spoiler, because the movie tells you this in the first twenty minutes. Most of the film is actually a flashback with the present day being Mayson’s (and Reiley’s) wedding day. Nobody actually comes out and says that they’re married right away, but we are told that Mayson got married to someone, and if you’ve seen any romantic comedy ever, you know exactly who that someone is.
So yeah, that’s the main plot in a nutshell. There’s no real buildup or payoff to speak of since we are immediately told that Mayson was looking for and found true love, and the actual romance part of the movie feels really, really rushed. It’s a shame, because even with a runtime that barely passes the one-hour mark, Be Mine had plenty of time to tell a decent love story. Instead, we get a movie that kinda wants to be Can’t Hardly Wait and sometimes wants to be a slapstick comedy but mostly wants to be a cute gay RomCom even if it doesn’t know how. I'm sorry, I think you've mistaken me for a 14-year-old girl.

Now that that’s over, I have to talk about my favorite part of the movie: Irene (Jessica Ream). I haven’t mentioned her until now because she really shouldn’t be in this movie.  Her character is 100% superfluous, but I love her anyway.  Why? Because she’s absolutely insane. All the other characters hate her, but she’s deluded herself into thinking that they all love her. There’s even this Rashomon-like sequence where she meets another one of Mayson’s friends. In her version of the events, their meeting is accidental but meaningful—a random twist of fate that blossoms immediately into a beautiful friendship. When we hear the other person’s version, she comes off as a desperate psycho.  It’s the only part of the movie that made me laugh.

I've got my eye on you, Valentine.

If it were just the Irene Movie, I’d give this film a five out of five, but as it stands I have to give Be Mine two measly scones out of five.
Talk about Be Mine (or just Irene) in the forums.