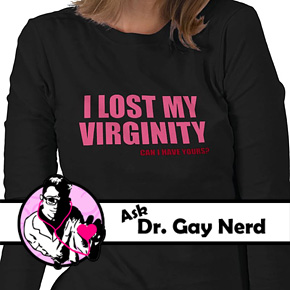 I feel like I really screwed up.  Up until pretty recently, I was a virgin.  I waited a little longer than most people because I’ve always thought that it should be something special.  But I went to this party and got drunk and someone started flirting pretty heavily with me.  We started making out and then one thing led to another and before I knew it, it was the next morning.

Doc, I am so embarrassed.  Even forgetting the fact that I think doing it should be something special, I can’t believe that I screwed up and gave it to this person.  They’re annoying, gross, and it was just totally wrong.  I’m annoyed with myself for giving into temptation and losing my virginity in a weak moment, but I’m ashamed of myself that it was with this person.

How can I live with myself after this?

Ah, the moment of weakness.  I think we all know it well, although probably to different degrees.  First, let me say that you have nothing to beat yourself up over.  I completely understand what you’re feeling (I think we all have some skeletons in our closets that we’re ashamed of), so know that you aren’t alone in that.  My saying this isn’t really going to make you feel better, but know that you’re not going to feel ashamed of yourself this way forever.  At least, don’t let yourself be.

Yes, your first time is something special.  But the big secret is that you’re going to have a first time again because the only first time that matters is the first time that you have with that someone special.  You haven’t ruined anything because you haven’t met the person yet with whom it’s going to be the most important.  Therefore, once you do meet someone who gives you butterflies, you’ll still be able to enjoy the first encounter with them where you really do give yourself to them fully.

You haven’t done anything wrong and you have nothing to be that ashamed of.  Sure, maybe you made a mistake, but as long as the two of you were safe, you haven’t done anything to beat yourself up over.  If this isn’t an experience that you want to have again, simply don’t let yourself go down that road.  When you do meet someone who you do want to give yourself to, allow things to happen.  Follow that basic rule of thumb and you’ll be doing just fine.