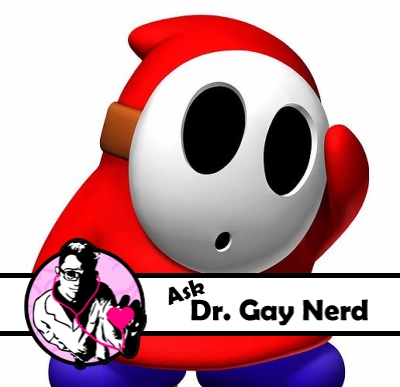 Doctor, I need help. I’m a shy person and it’s hard for me to participate in social situations. Whenever I’m around people I get uncomfortable and all my insecurities boil to the surface. It’s even more difficult because I’m gay(duh). I’ve only been with one person sexually but that was six years ago. Recently, thanks to vodka, I worked up the nerve to meet a guy from online and we ended up having sex. It was ok but the day after I felt horrible. Now I’m wondering if I’m meant to forever be a lonely hermit, scared of people and sex. How can I work up the courage to be me and enjoy life, especially men?

I understand what it’s like to be shy, but you are using this as an excuse and a crutch to not have to face situations that make you uncomfortable.  If you keep this up, you will, to use your own words, end up a lonely hermit forever.  You have to make a change if you want your life to be different.  Have you ever considered seeing a therapist to talk through your social anxiety issues?  I think you might get a lot of benefit out of this.  Getting uncomfortable around people and feeling all of your insecurities sounds like a social anxiety disorder to me and talking with a professional may really help you to start breaking through those obstacles.

In the meantime, however, you can start by asking yourself some tough questions.  What do you think makes you so nervous and uncomfortable, especially around men?  There has to be something to which you are having anxiety issues about.  If you really stop and think about past situations you have been in, you may be able to figure out what it is about these situations that makes you freeze up.  Once you figure out what these things may be, you can start to work up the nerve to confront those issues one at a time.  Naturally, you may be able to make quicker strides by talking to a professional about this, but that doesn’t mean that you can’t achieve progress on your own.

Alcohol helped you to lower your inhibitions and meet someone.  Now, I don’t want you to become dependent on alcohol to have social skills, but you may be able to remember this for the future, when you want to get involved in social activities.  As long as you drink moderately and are always careful to be safe, this can be a great way to practice confronting some things that you fear.  Just be wary about becoming dependent on alcohol to solve your problems.  It won’t.  Also, realize that at some point, you’re going to have to start doing all of this without having a drink or three.  Social lubrication is only good for a jumping-off point.  You’ll have to work yourself up to start doing this on your own.

Another thing that I think you need to confront is why you felt awful the day after hooking up with this person.  You say that you enjoyed the sex itself well enough, but the next day you felt awful about it.  Why is that?  Do you think that sex is meant to be within a relationship?  If that’s your viewpoint, that’s perfectly fine, although you’ll need to figure out how to work up the nerve to ask someone out before you start dating them.

I don’t think that you are as scared of people and sex as you think you are.  You’ve recently had experiences with both of these areas.  You survived them just fine, even if you’re freaking yourself out needlessly.  I feel like your PS is very telling.  “How do I get rid of the guy?”  Well, that’s kind of exactly the point.  He obviously liked you enough to want to spend time with you again.  Why do you want to get rid of him?  If you’re adamant about getting rid of him, you stop answering the phone and you stop returning his calls.  He’ll get the message.  But that’s not really the point.

You have to make a change in the way you operate here.  Social anxiety is very hard to live with, but that doesn’t mean you can just ignore it.  Talk to this guy.  Take things slowly.  Start talking to more people, make friends, and just progress slowly.  Test the waters.  You’ll slowly start to see that things aren’t as scary as you imagine them to be and with enough hard work and practice, you may be able to overcome your anxiety.