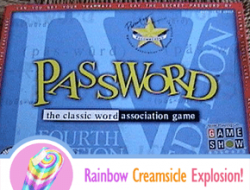 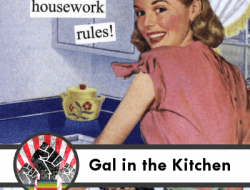 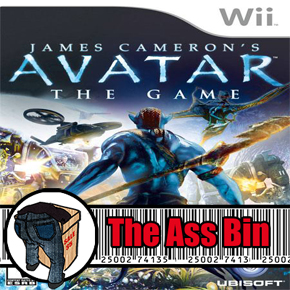 The Ass Bin: Avatar The Game

It would be cliché to attack Avatar at this point. As the highest grossing movie of all time, due largely to a fanbase that literally would rather die and hope to be reincarnated in its emerald green and neon blue forests than continue living on our comparatively grey planet, everyone with internet access has already seen the movie and made up their minds. You love it, or you hate it, there is no middle ground. But like most profitable movies, a not-so-good video game adaptation hit the store shelves just in time to take advantage of well meaning grandmothers at Christmas time. And this is where GN comes into the picture.
For added pain and suffering, I played the Wii version. Unbeknownst to me beforehand, the Wii version is different from the 360/PS3 version and considered by some to be the best. If this is the best, then the other version might actually be illegal as cruel and unusual punishment.
True, most gamers over the age of thirteen know that movie licensed games have a 99% total suckage rate, with the good 1% being Spider-man 2. If the game has a strong, recognizable franchise behind it, then its substance can be thin and flakey (though, not in the delicious crescent roll way) and still sell enough to turn a profit. But Avatar: The Game goes above and beyond ordinary crap, deep into the realm of aggressively bad.
The story plays out like an awkward fan fiction, abstaining from the mildly interesting movie storyline and diving into an original creation. The livejournal-quality writing would earn a B- in an 8th grade essay contest at best, vaguely defining a reason for a Na’vi hunter to run through the forest, bashing in the heads of countless copy-paste humans. For me to recall the nonsense might induce internal brain combustion, so all you need to know, just like with the movie, is that humans and technology are bad, and primitive societies are perfectly peaceful/objectively good. Look at how peaceful and in touch with nature the Na'vi are!

The gameplay falls far short of making up the gap separating the game from actually providing a good time. Three minutes into the it, I was already mildly irritated, bored, and wondering why I was wasting my life playing awful games. With the instruction of “reclaiming my tribe’s bow,” I blindly ran through the forest, trying my best to ignore the massive tutorial messages covering a third of the screen and wiggling the Wii-mote near any humans until they disappeared and their soul, aka experience points, was mine. Sometimes I’d fall off a path and bash into invisible walls for several minutes while mashing the A button to find the one climbable spot to get back up. And that’s basically the entire game.
Even the most basic action-adventure elements manage to infuriate. Despite the amazing acrobatic ability of the blue kitty people, the game restricts jumping to a dive forward unless prompted at specific locations to climb up a wall or across a chasm. The presence of enemies automatically initiates stealth and slow movement, whether players want to sneak or not. Although bullets don't seem to bother them too much and they're super strong, the Na'vi insist on stealth and boring gameplay.

It’s like the game is trying to make the fourteen year olds whose parents were tricked into buying the game walk away in disgust and vow to be twice as angsty at the dinner table tonight. The camera spins around without any input from the player, even while locked onto an opponent, usually moving in such a way that enemies become invisible. “Fortunately,” the human have neither ears nor the ability to see anywhere but directly in front of them while you stick a pole-spear-thing into their spine, so dying should not be an issue.
If you do manage to get hit somehow, never fear. Remember those irritatingly bright flowers that blossom six feet tall but withdraw back into their pods at the slightest touch? The developers decided that those should be health packs. Wait, you don’t remember the part in Avatar when Jake Sully touches a magic flower to heal his bullet wounds? Me neither.
Other minor elements from the movie have been remolded to fit generic game pieces: the Eywa seeds became experience pick-ups, bird riding became aerial orb collecting levels, and the Na’vi ability to mind control animals became a host of terrible combat and exploration minigames, though without the mildly pornographic brain stem mingling. Early in the game, Avatar introduces this agonizing ability by encouraging the player to brainwash a massive bee into sting mercenaries to death. Don't be fooled, this fight is not nearly as interesting, or even difficult, as it seems here.

After five minutes fighting with what turns out to be a helicopter-ish minigame with expectedly poor controls, wildly stabbing the air with a stinger the size of a human foot, players will hurriedly dash past any and all beehives for the rest of the game or risk smashing another controller. That is, if they can stomach playing the game any further.
Recommendation: Anyone desperate for more time in Pandora before the sequel comes out in 2014 would probably have more fun breaking their DVD and stabbing themselves in the wrists with the shards. Everyone else will have less fun than that.
Talk about it in the forums!