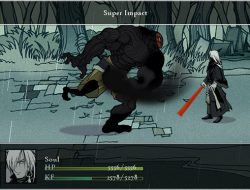 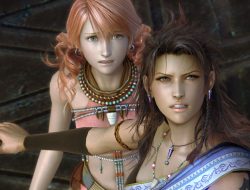 Are They or Aren’t They?: Oerba Yun Fang and... 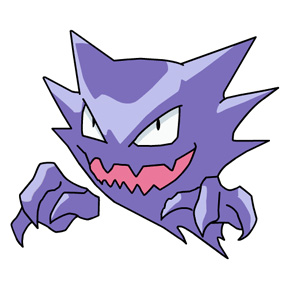 After reading this article posted on the GayNerd forums,  my little brain spun around death, Pokémon, & their relationship with Ghosts.

In the world of Pokémon, death is a real phenomenon. In the first generation, there was the Pokémon Tower.  Here the graves and tombstones of deceased Pokémon were erected presumably over their remains. Walking through the tower, you can talk to people mourning or remembering their dead Pokémon. Literal ghosts do haunt this tower, phantoms so fiercely terrifying that you Pokémon dare not move. After obtaining the Silph Scope however, one can reveal these ghosts as the catchable Pokemon in this area.  This is the only area to catch Ghost Pokémon.

From that fact, it would be easy to assume that Ghost Pokémon are really just dead Pokémon–that Ghosts are the “souls” of the Pokémon world.  When a  Pokémon has died, its soul or being will transform, evolve, into a Ghost Pokémon. This arrangement implies the afterlife for Pokémon is in fact the world they live in–essentially reincarnation.  The fact that, in this generation, the only Ghost Pokémon are Ghastly, Haunter, & Gengar all of whom share the same evolutionary path could even hint at the souls of Pokémon being exactly same–like the concept of Brahman & Atman in Hinduism.  It also hints at Ghosts being the ultimate stage for Pokémon to achieve: once you go Ghost, you’ve achieved the most.

However, this notion of reincarnation has one major obstacle–a very stubborn Marowak.  Killed by the nefarious Team Rocket when protecting her baby, she haunts the upper levels of the Pokémon Tower.  Blocking a stairway, she inadvertently helps protect Team Rocket.  After defeating her, her spirit will be calmed & she will be able to finally find rest in the afterlife.  Her departure can either help solidify or destroy the notion of Ghosts as Pokémon souls. If one were to solidify the Brahman/Atman concept, we can view this as the Poké version of Nirvana, where the Atman joins the Brahman.

However, the fact that Marowak retains her identity as a Marowak [rather than being a Haunter for example], it tarnishes the image of Ghosts as the manifestation of Poké-Atman. Also, the nature of reincarnation is a cyclical system, where one would never achieve Nirvana simply after dying, rather it is a build up of past actions that help one achieve the point of Enlightenment and then escape. Having only two cycles [the living Pokémon then its Ghost forum] is a far departure from the endless amount of cycles noted in Hinduism.  It instead, her death points to a solid afterlife or annihilation and degrades the concept of reincarnation and reduces Ghosts to just being a species of Pokemon.

While this does away the theory of reincarnation via Ghosts, it does not do away with reincarnation all together.  In the second generation, it is implied that Ho-oh resurrected the Legendary Beasts from the ashes of the Bell Tower [1].  The ability to be reincarnated reaffirms the separation of the living & deceased.  It also further weakens the Brahman/Atman concept: Once you go Brahman, you always stay Brahman–once you have achieved Nirvana, there is no coming back.

Ho-oh be made of Fenix Down

But this reincarnation is a unique occurrence, hardly explaining why Ghosts roam around the world.  Their existence could be easily explained as evolving as a separate species from Mew.  However that is far too simple & boring. As well, it does not explain the broader spirituality in Pokémon.  While it is nowhere near the level of religiousness of say Dragon Quest 9 [where saving is confession to a priest], there is a broader notion of an other worldliness.

Many of the trainer such as Channelers & Hex Maniacs often refer to the afterlife or spirituality before & after you challenged them. Beyond this, reverence for the dead is continued.  In the second generation, while the Pokémon Tower has been defiled to be the Lavender Radio Tower, the tombstones have been moved to a small building on the south side [2]. In Generation 3, Mt. Pyre is an island sanctuary for deceased Pokémon.  Following the first generation, this is the main area to gather your Ghosts.

The fourth generation has the Lost Tower, Sinnoh’s Pokémon Tower. In addition to the Lost Tower & the Hallowed Tower [home of Spirtomb], Sinnoh has an actual church.  Located in the southwest of Hearthome City sits a sanctuary done in the church style with stained-glass windows & Gothic architecture.  Inside are people standing quietly, with pews lined up and facing a portrait of a mountain with a great storm cloud above [points if you thought of God giving Moses the 10 Commandments on Mt. Sinai]. There is no music in this area. The only sounds are the sound effects when you talk to people or use your menus, supporting the reverence of this building.  The people talk about vaguely good ideals and time healing all wounds, issues that religions strive to answer. It kind of looked like this, just less inflatable.

In a game that has no real religion beyond mythology, it is a peculiar choice to incorporate a church.  It is more interesting that the church is located in the same place as the only confirmed foreigner in the game–Fantina, whose gym is also church inspired & specializes in Ghosts.  In the second generation, the Ghost gym leader Morty is held in the most ancient looking city Ecruteak City with its tagline as “A Historical City”.  Again, tugging at Ghosts relation to the past and death.

If we look at other prominent Ghost users, Agatha & Phoebe, we can see that Ghost Pokémon are still treated with the same general theme of otherness. Agatha of the Elite Four in the Indigo Plateau, is an elderly yet fiesty woman, while the young & bouncy Phoebe of Ever Grand City is dressed in tropical flair.  They seem a bit old and a bit young, respectively, when compared to the other Elite Four members.  While Phoebe lacks the ghostly age of Agatha, she makes up for being so closely associate with the “other”.  Wearing a very [tacky] tropical outfit distinguishes her as from a distanct culture not readily found through out the Pokémon world.  Her tanned skin and bellossom barrettes speak to the exotic nature of Ghosts, their mysterious abnormal qualities.  These qualities are often what bring pasty people to the tropical islands. No matter what the version, Ghosts & places of death seem to be linked.  Whether this is a hint of Ghost Pokémon’s tie to the afterlife or just a result of popular common sense to put ghosts with graveyards is up to the player to decide.  The issue of death is clearly dealt within these games, portrayed multiple times by the sites of remembrance enough to establish that there is a realm of death that all Pokemon will go to. Interesting to note is that, to my knowledge, there is no graveyard for humans that have passed.  Perchance dealing with human death is a bit too morbid for a child’s game.  Dead cute things are totes okay though.

8Bit Rosary is a series of articles analyzing religious issues and how they are presented in video games.

Have an opinion about Death, Pokémon, Ghosts, and/or Group Ghost Hypnosis? Post them here on the forums.