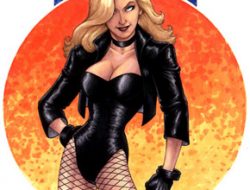 Are They or Aren't They: Black Canary 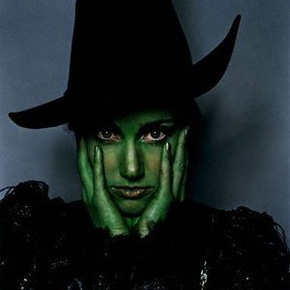 Are They Or Aren’t They: Elphaba Thropp

Can I get a “What! What!” from all the theatre nerds in the hizz-ouse?…Okay, what about the book nerds, fo’ shizzy? I only ask because this week’s chosen character is pulling double duty in the theatrical and literary worlds as the protagonist of Gregory Maguire’s Wicked and the Broadway musical based on the book. Really, she’s pulling triple duty when you include The Wizard of Oz movie, but there she’s merely the Wicked Witch of the West: an unnamed, emerald antagonist with a thing for ruby slippers. Maguire’s Elphaba, on the other hand, has a sense of depth to her. She’s an odd kind of hero—conflicted and bitter and not altogether sympathetic—but her death is a tragic one, as is much of her life. We know she’s green, but could she be gay? Why she might be gay: One word…no, two words…one name? Two proper nouns compressed into one: Gelphie. That’s one of those celebrity nicknames for the relationship between Elphaba and Glinda (actually, I’m not sure who did it first—the paparazzi or the shippers—but, like most things, I’m sure the internet had it long before anyone else). Unlike a lot of “ships,” Gelphie actually has some canonical support. The two share a meaningful kiss before parting ways in the book, and in the musical they sing a duet describing what their relationship meant to both of them (For Good).

Why she might not be: Fiyeraba. The nickname may not be as catchy, but that doesn’t change the fact that the only person we see Elphaba get wicked with in both the play and the book is Prince Fiyero.  When Fiyero is killed (or seemingly killed), Elphaba goes quite mad, seeking vengeance and forgiveness. Also, Maguire tends to give his Wicked characters a very fluid sexuality. Ultimately, this leaves the question of are they or aren’t they up in the air entirely. Why she should be gay: Forget Dorothy Gale! Be a friend of Elphie! Sure, “going over the rainbow” is a pretty gay metaphor, but what outcast doesn’t identify with the girl who went through high school with green skin? Besides, if Elphaba were gay, Idina Menzel would have made out with Kristin Chenoweth on Broadway! (Nobody better act like they don’t know who these two are—I know you gays watch Glee!)

Why she should stay in the closet: Is it fair to make someone else’s character gay? I know, I know! That’s the de facto homophobic reasoning used whenever any character comes out, but it’s still something of a valid point in terms of good writing if nothing else. You shouldn’t “just make” someone gay, or straight, or evil, or good, or whatever, but that’s not what Maguire has done. He took a fairly one-dimensional villain and made her a complex heroine who might be gay. But why the need for labels, man? She loves Fiyero, she loves Glinda, she loves red shoes. Deal with it.


Got something to say about Wicked? Head on over to the forums and speak your mind.

Tags: Are They Or Aren't They?, Broadway, Elphaba Thropp, Galinda Upland, musicals, Wicked

» Uncategorized » Are They Or Aren’t They: Elphaba Thropp