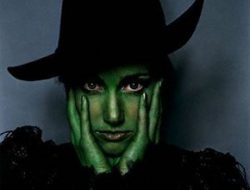 Are They Or Aren't They: Elphaba Thropp 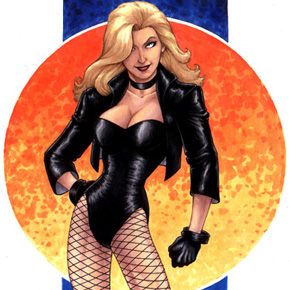 Are They or Aren’t They: Black Canary

I feel like I need to write more about comics considering how much I enjoy them in my day-to-day life. I alphabetize my comic collection each night, and I kiss them good morning everyday. “Good morning, Secret Six. Good morning, Wonder Woman. Didn’t forget about you, Stumptown. I love you with all my heart and soul, Batwoman.” That’s a slight exaggeration, but I’d still like to take a moment to profile a character I really dig: Black Canary. Dinah Lance is the daughter of the original Black Canary, Dinah Drake, and she kicks ass. Sometimes she kicks ass with the Birds of Prey, sometimes with this guy she kinda likes, and sometimes on her own.  The point is, if Black Canary is around, sore asses will abound. I don’t know why I’m rhyming… I think I’ve just watched this so many times that I’ve got musicals on the brain. Awesome musical numbers aside, is Black Canary queer? Why she might be bisexual: It’s a tale as old as time. A song as old as rhyme. Black Canary and the coming out that might have been. Internet lore (and Gail Simone’s tumblr) states that, once upon a time, Dinah was going to say, in a thought caption, that she was “70% hetero.” Some sources say 75%, but still, she’s a little light in the loafers…or heavy in the Dr. Martens or whatever. Also this:

Why she might not be: Sadly, the “70% hetero” line was dropped in favor of another, slightly less gay one. This change was meant to be temporary and the 70% line was supposed to be printed, but wires got crossed, machines became sentient, and Dinah became “…hetero to the bone…” I don’t know, that still sounds kind of gay to me. Like, the exact opposite of what you would say if you were indeed so heterosexual that your heterosexuality permeated your skin and your muscles and stuck to your very bones. Anyway, Gail still considers Dinah to be queer, but where’s the beef, Gail? Where is the hot, lesbian beef?

Barely even friends…then somebody bends.

Why she should be bisexual: The world needs more bisexuals. Not even “…in comic books,” or anything. Just in general. People have this whole idea of a stringent sexual binary where people are either straight or gay. Even when they manage to fit bisexuality into this view, they think of it as a 50/50 sort of thing. Maybe 55/45, but if any side has a clear majority, then you might as well play for that team and stop confusing everyone! This may be how some people think, but it isn’t how the world tends to work.  It’s bittersweet and strange finding out that sexual preferences may change, but it happens all the same.  So yeah, Black Canary—70% hetero and still 100% awesome.

Why she should stay in the closet: It can be a delicate balance writing LGBT characters. Mention that Dinah is bi once and then forget about it…and you’ll be accused of tokenism and pandering. Have her hook up with a girl one time…and you’ll be accused of tokenism and pandering. Flirting with a waitress? Going to a gay bar? Superhero threesome? Tokenism, pandering, and exploitation. Obviously you can’t please all of the people all of the time, but the accusations of tokenism, pandering, and exploitation could very well be valid depending on what writer is dealing with the character. Comics have a sordid history of exploiting women for the sake of titillation and male angst. This section could be an essay in it’s own right, but for the sake of brevity, I’ll just say that inclusion in comic books is by no means a lost cause, but it is something of an uphill battle. In a perfect world, Dinah could say she was queer in one issue then have nothing but sticky, hetero archer sex until the end of time and that would be fine. But we don’t live in a perfect world, which is why we need heroes like Black Canary in the first place.

So, what do you think? Is this article a beauty or a…okay, I’ll stop now.  Go discuss things in the forum.

Tags: Are They Or Aren't They?, Black Canary, did I mention that Black Canary kicks ass?, Dinah Lance, Gail Simone, the one and only Birds of Prey

» Uncategorized » Are They or Aren’t They: Black Canary