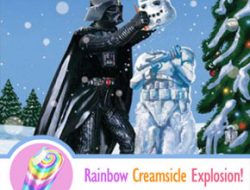 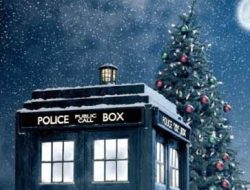 Holiday Nerdery – Even More Holiday Specials You Should... 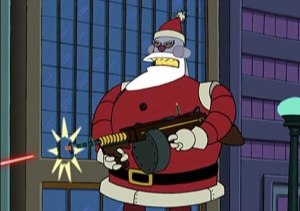 Had enough of watching A Christmas Story after the fifth time? Can’t quite get into the spirit of the holiday season when there isn’t enough nerdiness in your celebrations? Well never fear, Gay-Nerds has your back like always. We’ve compiled a short list of fantastically nerdy holiday specials and movies to get you ready for the big day. Move over, dreams of sugar plums. There’s a robotic Santa Claus from Neptune here to haunt our dreams this yuletide season. Gremlins
Gremlins is a black comedy about a father who buys a magical creature, called a mogwai, from one irresponsible kid and gives it to another, his son, as a gift. Failing to heed the warning against getting the creature wet, it quickly spawns dozens of other mogwai that are nowhere near as cute as Gizmo (the original mogwai). The rest of the movie delights in following the evil gremlin’s reign of chaos around the town and the gruesome ways the human cast puts them down. Smoothies, anyone? Blending horror into the typical family fun of the Christmas season usually results in movies of reindeer turd quality. Yes, I’m looking at you, Black Christmas. But somehow, this corny romp around with some monsters that just want to have fun at the expense of other’s health and sanity is an all around good time. Maybe it’s the 80s silliness and the fact that the gremlin’s pranks never *quite* get into the horror/slasher area, despite the fact they quickly approach it, that saves this movie from being terrible and puts it firmly on the shelf of “good.” I can only imagine how awful it would be as a remake these days, when “horror” means “blood orgy scenes.” Not that we all don’t enjoy a good blood orgy from time to time…
“Xmas Story” – Futurama
Fry discovers that New New Yorkers in the year 3000 still celebrate his favorite holiday from yesteryear, except it’s now called Xmas, palm trees have replaced pines as Christmas trees, and a rage filled, murderous robot Santa Claus hell bent on sending the entire naughty list to their doom has replaced our slightly more peaceful Santa. Unfortunately, everyone is on this St. Nick’s naughty list, which makes being caught outside the night of Christmas Eve terribly dangerous, which is exactly what happens to Fry, Leela, and Bender. Eventually, with a little bumbling help from Zoidberg, Santa Claus is fended off, but he promises to be back exactly when no one expects him – next Xmas. He's making a list, checking it twice...and murdering everyone on it.

The always irreverent writers of Futurama once again prove that putting well established twentieth century traditions into a nonsensical thirtieth century world of alcoholic robots and Jamaican limbo is always a good idea. That whole “Christmas spirit” thing we’re always hearing about in own world of annoying musical cards and stories about magical snowmen shines through in New New York, even when a homicidal robot from Neptune is trying to kill everyone. Now *that* is some Christmas cheer…I mean, Xmas cheer.
A Muppet Family Christmas
Have you ever wanted to see every single one of Jim Henson’s creations, including the Muppets, Sesame Street, and Fraggle Rock, shacking up together for Christmas shenanigans and hilarity? Yes? Well, then I have some good news and some bad news for you. Look. It's your childhood getting together to celebrate the holidays.

This fantastic muppet crossover features all your childhood television favorites going to Fozzie Bear’s grandmother’s house for the Christmas holiday, of course singing and dancing through the entire show. While the plot might not be what one would call “coherent” or “anything more than an excuse to have a mega crossover special,” it’s still an adorable tribute to childhood memories that people of all ages can enjoy. Unfortunately, several scenes and musical numbers were cut from the American VHS version (though the UK version has almost no cuts), which makes purchasing the movie feel like you’re being slighted. Oh, right, the bad news. The movie can get a bit pricey to buy, going for as much as $75 on amazon.
“Holiday Hi-Jynx” – Pokemon
A chance visit with a Jynx leads Ash, Misty, and Brock to try and take it back to its trainer, who just happens to be a certain magical gift giving holiday elf we’ve been talking a lot about lately. Meanwhile, Jesse, James, and Meowth perfect a plan to kidnap Santa and ruin Christmas for everyone as revenge for Santa stealing Jesse’s toy as a child, which seems like a fair trade to me. When they finally arrive at Santa’s workshop, Ash and friends have to do their best to keep the holidays safe from what could possibly the first Team Rocket plan that might actually succeed. Gasp! Why doesn't Santa seem more upset at being captured?

What a mess of an episode this one turned out to be. No, I’m not talking about how it follows the filler episode layout for Pokemon:
1) Introduce a Pokemon.
2) Team Rocket steals said Pokemon.
3) Blast off Team Rocket
4) ?????
5) Profit.
What I’m talking about is how this episode aired right after the Porygon-seizure incident in Japan and subsequent production stop, placing this episode awkwardly outside of the show’s order of events (example: Ash fights with Charmander, despite it having already evolved at the time). Plus, this was the episode that got Pokemon, specifically Jynx, accused of portraying a racial stereotype of African Americans by the well meaning political correctness police. The controversy resulted in the episode being pulled from rotation, and Jynx’s skin changing from black to purple. Capcom obviously learned nothing from Nintendo when they suffered the same fate a decade later with Resident Evil 5.
“Marge Be Not Proud” – The Simpsons
A brand new fighting game, Bonestorm (an obvious parallel to Mortal Kombat), has just hit the stores, and every kid with a bit of self respect is getting their hands on it. Not one to be left behind, Bart eagerly asks Marge for the game as a Christmas gift. As is expected, Marge is shocked by the tasteless (read: delightfully excessive) violence and refuses, so Bart tries to steal the game from the local department store. But when he gets caught and starts to feel like he’s lost his mother’s love, Bart makes a decision to set things right in a wholesome, uncharacteristically sweet way – giving his mother exactly what she wants for Christmas. Never fear, for Bart’s last minute good will is rewarded in exactly the typical “well meaning but unknowledgeable about games” way only a parent can – getting a cheap shovelware game as his gift. As you can see, Marge spend most of this episode being slightly less than pleased.

The Simpsons has a long history of fantastic Christmas episodes (in fact, the very first episode, not counting the family’s short run on the Tracey Ulman Show, was a Christmas episode). Despite that, even out of so many excellent seasons to choose from, the Christmas special from the seventh season easily stands out from the pack. Every kid has been in Bart’s shoes here, wanting some fantastic game/movie/toy that that our always-out-to-ruin-a-good-time parents wouldn’t let us have. And some of us have even made the same choice, choosing to steal said piece of awesome, probably getting caught in the process. Yet how many of us went out of our ways to fix our mistake in such a D’AWWWWWW fashion? Wait a minute. Did we just learn a life lesson about responsibility from Bart Simpson? I would say this is a sign of the apocalypse, but since the episode aired in 1995, we’re probably okay. Probably.
Seen these specials and have a few fond memories to talk about? Wanna ask where you can find and watch them online or purchase them for your collection? Talk about it in the forums!