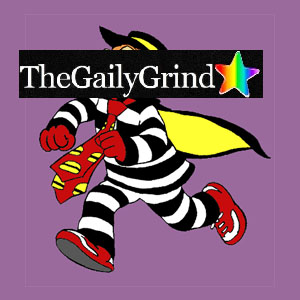 Guys. I’m pissed. Hold my leather murse while I go snatch this skank’s weave and sandpaper his face with my hairy taint until he gets blistering rug burn all over.

So basically, yesterday, I made an article called “14 Gay Porn Nerd Parodies You Didn’t Know You Wanted Until Now”. It’s essentially the pinnacle of my journalist career. I spent 3 hours combing through gaypornparody.com and the internet wikis looking for relevant nerdy parodies. Then I cross-referenced their titles with the AEBN database to get better pictures and to get synopses text. And then I had to shittily photoshop blurs on all the genitals to make sure no dicks or asses were visible. So understandably, I was like, “Today is the day I get my Pulitzer”. I was satisfied with all the effort that I put and I was pretty happy that it was doing decently ok on our Facebook See this? This is a success for our Facebook page. I cried manly queen tears of joy.

I went to share the story on Reddit since I was proud of the list I compiled and then I began to take a well earned lunch and a break. A couple of hours later, while procrastinating on Facebook, I see: What the shit? Those are my choices but that’s not my link. What the ever living fuck? Wait WHAT. 157 likes annd 83 shares?

I hurried home and I was hoping that I was wrong and it was a coincidence but lo and behold, it’s almost exactly my list. Minus two. I was livid. Gaypornparody.com has like 40 parody titles but our lists are the same. Those odds are unbelievable. The Gaily Grind saw my article and essentially stole the entire thing. You know how I know? He might’ve reuploaded stuff on imgur but there’s stuff like this:

And the most damning evidence that he just copy pasted my entire article:

Yeah, you see that? That gets added to anything you copy on my page. He forgot to edit this one out.

I am extremely annoyed. He may have given a tiny linkback but he just copied my list verbatim. Not only that but the most offensive part was that he removed Super Barrio Bros and Sherlick Holmes. How dare you, good sir. What do you have against latinos and pasty british men? I can understand dropping Sherlick but Super Barrio Bros. was one of the best puns on that entire list. I am incredibly offended by your taste in puns.

Look, I get it. The internet just copies shit over and over again. But at least add something new to it. All I see is a crappy screenshot and 2 trailer video links. Plus, I’m just a tiny website compared to his. It’s frankly, very annoying. I always ask permission before reposting or I give full credit and add at least 1 paragraph or way more pictures to fluff it out. Or I just reblog/share the original article to spread the love.

My friends came to my defense on twitter but as of writing this article, they have not responded. Here’s the link to their article: http://www.thegailygrind.com/2014/11/20/10-gay-porn-hollywood-parodies/ It’s still unchanged from when I took these screencaps and posted this article