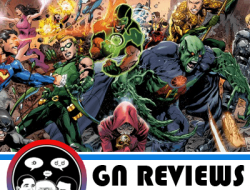 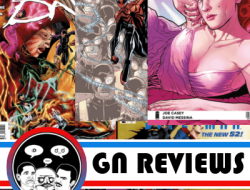 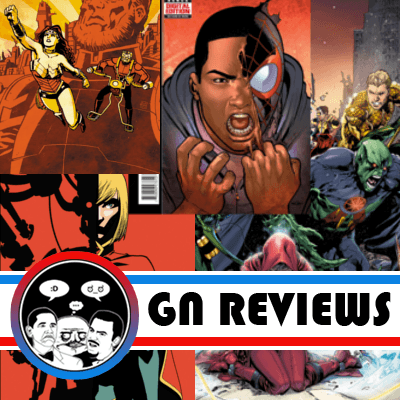 After Supergirl was poisoned during the H’el on Earth saga in the Superman family cross-over event she flees the planet to wind up on I’noxia. A planet made of sentient metal that adjusts to the memories of visitors. She is now being confronted by Cyborg Superman. Although the New 52 introduction of this classic Superman villain isn’t garnering much press it is a VERY different take on the character. He’s lost his memory and is some half robot/half Kryptonian relic that wants to use Supergirl’s body to complete himself.

I’noxia is slowly becoming a new, synthetic Krypton. A gift according to Cyborg Superman. He is willing to upload Supergirl’s consciousness into the planet if she gives him her body so he can become whole. She doesn’t take him up on the offer and attempts to escape, in turn Cyborg Superman turns I’noxia’s forces against her. However, Cyborg Superman is taking orders from a higher power that wants to study Supergirl and the Kryptonite poisoning she suffers from.

The new writer, Michael Alan Nelson, has written a fast-paced story and continues the voice of Kara that the previous writer gave her. She has a few good one-liners and a moment of introspection. My favorite part was when Cyborg Superman sent an army of I’noxian Supergirl doppelgangers after our hero. During the battle she expresses outrage and the unfairness she has faced and while she pummels the clones they echo her sentiments (they are made of her memories after all). It was pretty cool, she finally stresses about how shitty she’s had it since she woke up.

The art, brought to us by Diogenes Neves and a couple inkers, is nice. While it’s nothing spectacular the art is solid but I do miss Mahmud Asrar.

The verdict: Decent, intriguing, and the upcoming battle between Brainiac and Cyborg Superman in Supergirl should be super awesome! This gets 3 stars! Miles Morales FINALLY puts the costume back on! And, no, I don’t consider that spoilers because we all knew it would happen. However, the reason he becomes Spider-Man again is kind of . . . meh. The issue is devoid of action except for a brief flashback into the creation of Cloak and Dagger. Most of it the issue is focused on Miles trying to cope with not being Spider-Man and everyone wanting him to be Spider-Man. His girl friend, Katie Bishop, assumes that Miles and Ganke are fighting because Ganke has a crush on him. It was a funny enough conversation  (and Mile’s facial expressions are gold) that leads to a series of panels depicting the fight Ganke and Miles get into over him giving up being Spider-Man.

The reason Miles finally puts back on the costume doesn’t touch me as much as I’d hoped or thought it would. Jessica Drew (Spider-Woman) tells him her origin story (she’s a genetically manipulated clone of Peter Parker) and that she feels that the Peter Parker part of herself would want Miles to be Spider-Man. It seems emotionally manipulative more than anything. I really want Miles to choose to be Spider-Man, rather than be guilted into it. But that raises the question about power and responsibility: is it fair to expect a 15 year old to put his life on the line according to the words of Uncle Ben? I do appreciate Aunt May thinking that Miles should get the chance to grow up and do what he wants, he isn’t Peter after all and he is still dealing with the death of his mother.

Marquez’s artwork is so . . . awesome. I’m kind of a dick when it comes to art, it takes a lot to impress me and I find I feel a lot of art is only sightly better than mediocre. But Marquez is a great successor to Pichelli and Ponsors colors still amaze. But it’s the facial close-ups of the characters where Marquez shines. From Miles intense stare to Katie’s concerned look to Jessica’s pity-inducing gaze . . . . it’s just brilliant. And I think he draws the best web swinging I’ve ever seen.

While I hope that Miles eventually chooses to be Spider-Man, utterly and completely, and it doesn’t seem like he does it out of a misplaced sense of guilt, the current arc featuring the Roxxon corporation and Cloak and Dagger hint at something bigger going on in the Ultimate Universe. I’m excited for what’s next! Oh, Azzarello. I don’t know what to do with you!

I’ll start with the art on this one as it’s easier to tackle: Chiang is always great, always. His vision of  New Genesis, the home of the New Gods, is gorgeous and sprawling. His Wonder Woman is always intimidating and powerful looking. The art is fun with bold lines and sharp colors, brought to us by Matthew Wilson, keep this visually pleasing!

Now . . . . the story pics up after Wonder Woman RAN away from her older brother, the First Born of Zeus and Hera. I’ll repeat that: Ran. Away. And not only did she run away but she was saved by Lennox when he sacrificed himself for the group.

In the last arc Wonder Woman was slightly rebellious and always ready for a fight. And in Justice League she’s a warrior born, looking for a fight and not afraid of using deadly force.

Azzarello seems to be nerfing her character, even though they’ve buffed her power levels in the New 52. It’s weird, I think. The comic seems to take focus away from her. And in this issue High Father gets the last word. I don’t like it. I mean, I liker her personality but High Father, Orion, and Lennox have been upstaging her in her own comic. I think Azzarello really does have an idea about where he wants to go with her but getting there just seems to be a strangled route.

Now, the issue does end with Wonder Woman threatening to kill The First Born. Now, Wonder Woman and her friends (joined by the God of War), will take on The First Born and his Jackelman. This seems cool as it’s Wonder Woman doing superhero stuff, so far in her comic all her world-saving battles have been on Mount Olympus and she’s been pre-occupied with trying to rescue her baby half-brother. So seeing her in London, battling in Westminster Abbey, saving a city of millions . . . it’s just cool to see her actually be on par with Superman in terms of epicness.

However, all that will be in the next issue and there’s a chance DC will mess that up, too.

Judgement: While this issue does some cool things with the New Gods and setting up Wonder Woman for a big battle in the heart of London it seems to be a lot of exposition that doesn’t focus on the title character like I’d wish. 2 stars. And Trinity War marches on!!!! The fallout from the casualty in the last issue causes Superman to turn himself in and the two Justice Leagues to house down under the same roof for a time being. Waller wants to use the catastrophy in Kahndaq to her advantage, The Question seeks answers, Batman tries to find the science behind Superman’s killing of Dr. Light and Wonder Woman goes after the mystical aspect, interviewing Hephaestus and seeking the origin of Pandora’s Box.

Wonder Woman comes up empty so she flies across an ocean and asks the Justice League Dark for help. Then The Question breaks a very weak Superman from his cell and offers to tell him the truth behind what happened. Bam! End of issue!

I loved the writing. Seeing the two Leagues interact, seeing Trevor question Waller and the JLA, Wonder Woman calling Trevor out for forming the JLA, Waller asking Firestorm if he can make Kryptonite . . . a bunch of stuff happened that will carry on well beyond Trinity War, they are setting to shake up the power dynamics in the DCU. Johns really does a great job with big stuff like this. One thing I really like about this is that it isn’t universe wide, the world is at stake for sure but compared to the Crisis of DC’s past this is rather small scale. And I think it’s a great way to build up to bigger and badder things in the New 52 Universe.

The art was great as well. I have been a fan of Doug Mahnke since I discovered his art in the old JLA comics. He’s gotten even better. From big battles to serious facial close-ups he nails ever panel. It’s very, very well done.

This issue is great and sets up for even bigger things: 4 stars!