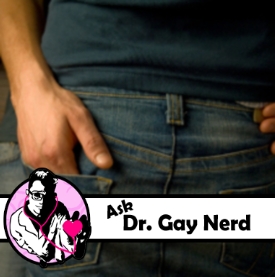 As your biggest gay Sudanese fan I wanna thank you for all the relationship advice which is relatable to me as a gay nerd, it really help me to go out there and meet interesting  people. Doctor, I really need your advice, I met that guy recently, he’s everything I look for, he’s really nice, funny, intelligent, mature, we really click and many different level, every time we go out for a date we talk for hours, we have a lot in common, he’s not the “arrange Materia better than I could” kind guy but he’s not the causal gamer either, to be brief I think we are perfect match for each other.

The problem im not sexually attracted to him, we didn’t have sex yet, but as “retired whore” am sure not into him physically, I believe mutual sexual attraction as part of any healthy relationship, but I really like the guy a lot and I could sense that he’s really into me, I’m really afraid to rush anything and screw up everything, what should I do?

First off, thank you so much for this letter!  It’s great knowing that my words are actually getting out there and helping people, especially on a global level.  You sure do know how to make a boy feel special!

But let’s move on to your issue.  It sounds like you’ve met someone really amazing and for you to feel so strongly about him is a wonderful thing.  I absolutely understand your fear about not being sexually invested in him though, especially knowing that you consider yourself a “retired whore.”  I don’t necessarily think that this is a dealbreaker, however.

Sex is important for a healthy relationship, yes.  That doesn’t mean that sex needs to be the first territory explored.  You say that you don’t want to rush things and I think that’s really good.  Keep things going slowly and you may be surprised by what you come to learn about this guy as time goes on.  I’ve personally been in a relationship where I wasn’t attracted to my boyfriend at all when I first met him.  Yet, as I got to know him and fell in love with his personality, he started to become irresistible to me.  We ended up having quite a healthy sex life during our time together.

If this guy is as great as you say he is, keep dating him and take things slowly.  You may very well find that as time goes on, that you’re falling for him and that sexual attraction is building.  Then you’ll have everything you want!  There’s a chance, though, that although the two of you are growing really close, that spark just isn’t there between you.  In that case, take comfort in the fact that you’ve found someone who’s going to be a great new close friend and discuss this fact honestly with him.  Hopefully, whatever you end up feeling toward him, the feeling will end up being mutual.

Don’t feel the need to rush any decisions about this guy.  Just enjoy him and what the two of you have together.  Try not to think about it and, before you know it, you’re heart will be telling you what to do.