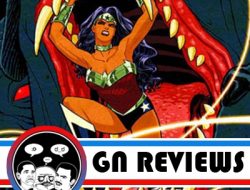 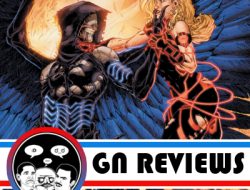 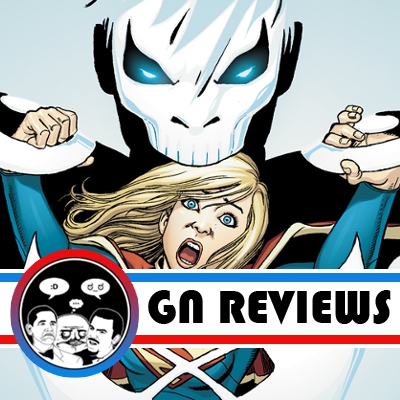 Kara Zor-El, I’m sorry, Supergirl, has it made in Post-52 DC. No, she’s not rich and her life hasn’t been easy and she’s been hassled and pretty much had her ass kicked since the get-go. But in less than a year she already has a rogues gallery that rivals her cousin’s. And we all know it’s the villains who make the hero. Despite being attacked almost monthly by a new baddie Kara has made two new friends without learning English. The comic isn’t without problems but it’s a fun read. I give it 3 stars! The last review left off with Kara learning about Krypton’s fate. Kara, not pleased to hear about the planet’s destruction, chose not to believe Superman and to find a way back home. She runs into a snag in the form of   Simon Tycho. Tycho is a multi-billionaire scientist/businessman/space-pioneer who takes a creepy interest in teenage Kara (asking for her blood? Eww). Fortunately she escapes and finds her home city of Argo floating around a blue sun on the other side of the universe. Unfortunately she’s being followed by Krypton’s fabled “Worldkillers”.

In Kryptonian lore there were very powerful beings capable of destroying planets called “Worldkillers”. During the end days of Krypton General Zod was involved with creating super-powerful soldiers with similar gifts to their namesake. Kryptonian scientists stole embryos from other worlds and genetically engineered them to frightening power levels in a space station. After the planet’s destruction they survived  and sought out their origins; drawing them to Earth, where the last two Kryptonians wound up. Kara escapes her encounter with Reign, the tactical leader of the Worldkillers, and flees Argo before it falls into the star. Kara looks on as the last remnant of Krypton is destroyed is what was a rather poignant panel. After realizing she has no home left but Earth she decides she must protect our planet  from Reign, who is going to take it for her own. Kara battles Reign and three other Worldkillers in New York City. After saving the city, learning that there is a missing fifth Worldkiller, and escaping the military (who aren’t too fond of metahumans save for Superman and the Justice League apparently) she takes up with a new friend from Ireland in Queens. Whew . . . that was a lot of plot to get through. Now, I do like this comic but it is everywhere. Seriously, it’s everywhere. Green and Johnson have just thrown villain after villain after this girl and I’m exhausted just reading it. I was worried at first that this would be a slow paced comic but it’s become VERY action-filled.  I am begging the writers to give Kara some time to catch her super-breath. She watches her home town fall into a star, saves New York from a gang of femme fatale alien monsters, fights off the military, and then goes to a coffee house music show in less than a day. Kara’s being swept along in this busy, clunky story rather than setting her own pace. Supergirl just doesn’t seem to have the same tight plot of Batman or Wonder Woman. It’s jumped from fight-to-fight with a few Kryptonian flashbacks to reveal pieces of her character to us. There are subtle clues suggesting that both Tycho and Reign have schemes in store for Kara but we don’t know much yet about an over-aching plot.

The new villains are rather cool for the most part and I do appreciate that they’ve already given Kara a rogues gallery that can lead to some great stories but they rushed them out so fast it’s hard to get a good gauge of her new enemies. I wish that they would have explored the Worldkillers a little more in depth, especially after dropping that bomb about the fifth Worldkiller missing. The only Worldkiller we get to know is Reign and that’s mainly because she doesn’t stop talking. This is an easy, if cheap, way of getting us to know the character. However I won’t hold it against the writers because Reign is a wonderful villain; she’s terrifying, ruthless, smart, and I can’t help but feel sympathy for her current situation: she’s lost in a universe she was designed to conquer and her only clue about her origin is Kara.   Having Kara’s friend, Siobhan/Silver Banshee, be a potential enemy doesn’t seem fair, she has enough issues to deal with without having to constantly battle her only friend. I do like that Silver Banshee is steeped in Irish folklore and mythology and Kara does need a magic based villain so I’ll trust that the writers can work something out with her. I’m a little torn about Tycho. On one hand he feels kind of forced, as if the writers said, “Hey! Superman has Lex, yeah? Let’s give Kara a billionaire-genius-alien-hating-douche-of-a-villain as well!” But he is disgustingly wretched and charming and smarmy and arrogant (like Lex). He’s fun for sure but the writers need to do something with him besides making him just a parallel to Lex Luthor. Everything else about the comic is great-ish! Mahmud Asrar’s pencils and inks are wonderful. The art in the book’s only flaw is colorist Dave McCraig. He’s been great until Issue #11, it almost look as if he’s phoning it in. Or, you know, whatever the visual equivalent is. And I’m going to commit major geek-sins and say that I’m not impressed with George Perez’ Guest Pencilling appearing in Issue#8. He’s not a horrible artist, he’s great. I just don’t prefer him over Asrar. At all. The comic is solid and I really think DC has something here (and they need it considering their less than stellar treatment of women, both Pre- and Post-52). If you’re not sure if it’s for you, you should check out the first volume of Supergirl in October.