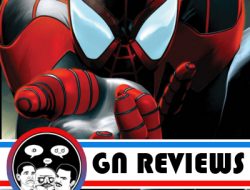 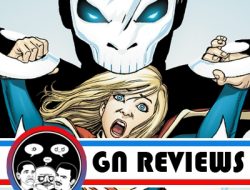 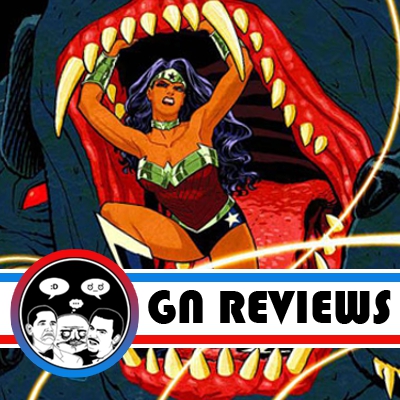 Our daring Amazon Princess has been through quit a bit since we last left her: She left home, returned only to find that Hera had taken revenge against the Queen of the Amazons, went to hell, almost got married, and faced the twin gods: Apollo and Artemis for the throne of Heaven. She has been a BUSY, busy superheroine. Despite some problems (and problematic material) and a guest artist I found not up to Chiang’s talent I have to give Wonder Woman five stars . . . The series, under writer Brian Azzarello, has progressed beautifully! He originally said he wanted it to be like a horror comic. And giving Wonder Woman’s mythological origins it wasn’t hard for him to add a supernatural twist to this superhero tale, but I still don’t see it as a horror story. It almost reads as if he’s telling a Greek tragedy rather than a comic book tale. While other heroes are facing psychopaths, saving the world, and wearing masks Wonder Woman is starring in a tale worthy of any demi-god. Like Hercules, Theseus, Perceus, Diana has faced her godly origins, beheld tragedy, and is now fighting the gods themselves. That isn’t to say that the comic is without problems. Issue #7 in particular, drew the ire of long time Wonder Woman fans and feminists alike and not without reason. Themyscira is the only matriarchal society in fiction today, Pre-52 it was beautiful and peaceful with its inhabitants only learning the art of war out of a sense of duty to protect their home and to remind themselves of their troubled past. However Azzarello has changed it significantly. While they Amazons have always been fierce warriors they have seemingly lost their polish; the island no longer boasts ornate temples of white marble but simple stone buildinds, their armor is no longer uniform and appears battle worn and rough, they go one raids every 33 years to rape/seduce seamen, they trade their male-born for weapons built by Hephaestus. These changes are not without problems to be sure but I am torn about these changes, so very torn. The Amazon matriarchy was never without problems, but it was a nice fictional foil to see in a patriarchal world. Now the only female-led society in modern fiction is composed of rapists and child killers. But I can also see the historical and mythological parallels and the history geek in me likes it. Having the Amazons seduce sailors could have created the siren myths of the ancient world and having them kill or give up their male children draws parallels to the Spartans who cast away their deformed. Hephaestus trades weapons to the Amazons and raises the Amazon men as slaves in his forge. After Wonder Woman tried to free her brothers we see a serious case of Stockholm syndrome, with the Amazon men asking Diana to spare the life of their captor because their mothers treated them even worse. It’s a very touchy and problematic issue, but it extends beyond that: Why fix what isn’t broke? Why change Perez’s Amazonian mythos? Why make the Amazon’s a bunch of fear-mongering, violent, rapist, baby-killing, she-devils? And why send their Princess to be an ambassador of peace if they’re so violent? I’ve trusted Azzarello this far and I hope that there is something about these changes that adds to the story. I don’t have to have the Post-52 book completely betray everything that Wonder Woman stands for.

After failing to save her brothers she descends into hell to face Hades who has kidnapped Zola (the mother of Zeus’ latest love child) and Wonder Woman intends to retrieve her. Another thing Diana has in common with her mythological brethren, going to the Underworld to save a loved one. One thing that was somewhat horrifying was Azzarello and Chiang’s Underworld. Constructed of souls and filled with skinless monstrosities, Diana faces Hades in his home turf and nearly weds him. After escaping Diana faces both Apollo and Artemis for the throne of Zeus and has her ass kicked. Tony Akins did art for a few issues and I must say . . . I wasn’t pleased. His art was fine but I’m so happy with Chiang’s work that I’ll be upset if DC ever moves him to a different title. When I think of Wonder Woman it’s Chiang’s tall, muscled Amazon that sticks in my mind. And the designs of his Olympians are some of the coolest incarnations of the Greco-Roman pantheon i have seen. I specifically like his vision of Apollo and Artemis, the twins that represent the sun and the moon. While Apollo is black like coal, with a fire under his skin like an ember that can burst through and engulf an enemy in flames at his whim, Artemis is pale, sometimes seen with antlers and glowing. It’s a dichotomy that works beautifully with these two gods. Strife’s design is still one of my favorite but Hermes has finally grown on me. We never get to see the face of Aphrodite but she’s a red head and, apparently, very beautiful. Hephaestus, Demeter, Hera, Zeus, Hades, and Ares all have designs I like as well. Poseidon’s bothers me, mostly because he doesn’t have a humanoid form like the others but instead is some weird cross between whale/octopus/other-sea-monsters/I-don’t-know-what-else. It doesn’t seem to fit with the looks of the other gods, really and I can’t let it go and I want it changed. Like, now. In summation Wonder Woman’s ride has been wild and far from perfect. I actually love that about it. Azzarello took a huge risk with changing the Amazon’s lifestyles and as problematic as I find it it seems to fit with this book’s dark mythos. I’m a complete sucker for Wonder Woman and I suggest you pick up her latest trade or add the title to your pull-list. Now. Do it. You’ll regret it if you don’t.

For more reading on the sexism issues in Wonder Woman #7 here’s a great article on why it’s so problematic. And here’s one about maybe it’s all a big hoax and will (or should) be retconned. Who knows? Tell us what you think (about the series as a whole or Issue #7) in the forums!