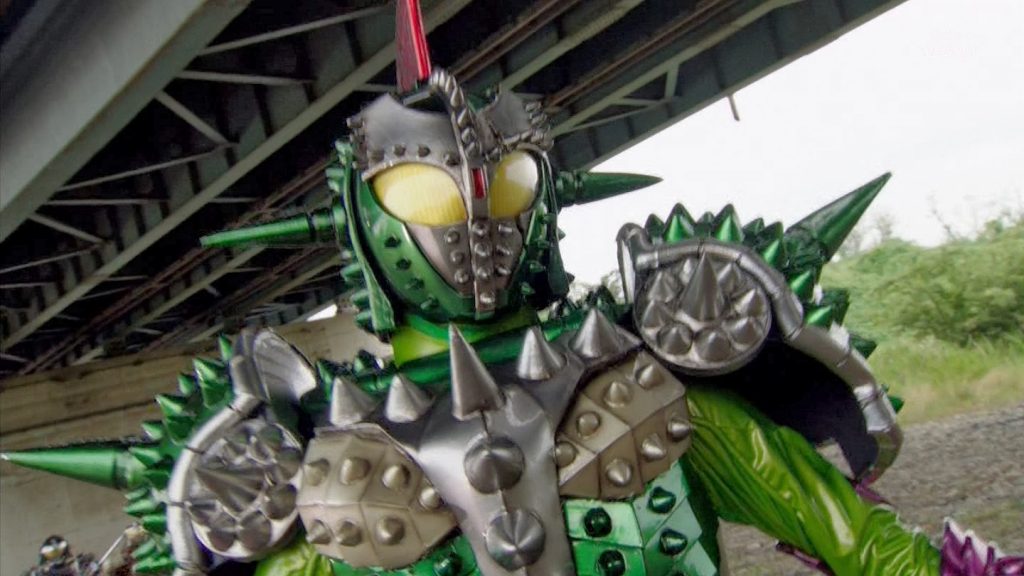 Welcome to the first installment of “Gay of the Week,” where we highlight LGBT characters in film, television, comics, anime, and video games. Our first entry is Kamen Rider Gaim’s badass pastry chef, Oren Pierre Alfonzo. For those unfamiliar, Kamen Rider Gaim is last year’s entry in the long-running tokusatsu (Think Power Rangers or Ultraman) TV series, Kamen Rider.   The show is written by Gen Urobuchi, who you might know from the anime series Fate/Zero and Madoka Magica.  Kamen Rider Gaim starts out as an innocent enough Sunday morning kids show, with the cast having Pokemon-like battles with monsters summoned by lock seeds (which you can see Oren holding in the image above).   By the end of the first episode, things get just a little out of hand when the monsters start to revolt.  Kouta Kazuraba takes a lock seed, and uses it to transform into the title hero, Kamen Rider Gaim.

Oren doesn’t show up in the show until episode six, but he makes one hell of an entrance.  While passing himself off as a flamboyant pastry chef, his restaurant is disturbed when a couple of “punk kids” start causing a scene over a lock seed.  Without skipping a beat, he kicks their ass, and takes the lock seed as his own.  Oren takes the opportunity to gloat about his military background and uses the lock seed himself to transform.

And with this we have “Mister Dangerous,” or Kamen Rider Bravo.  As the series progresses, Oren becomes a bit of an antagonist, challenging any other rider he can, and making the people of the city believe the main characters are the ones behind the monster attacks.  He does this in tandem with the shady Yggdrasil Corporation, led by Takatora Kureshima, or Kamen Rider Zangetsu.  When Bravo first meets Zangetsu, Takatora quickly wipes the floor with him.  Instead of holding a grudge, however, Oren falls in love with the “white rider.”  He works with Yggdrasil for awhile, until he decides to take one of the other riders under his wing after his best friend dies.  Oren plays the fatherly role for awhile, until the series hits its final arc.  At this point, Kamen Rider Bravo joins with other riders to tackle a large menace threatening the city. We’ve known for a while now that Japanese media isn’t super friendly to gays.  If you DO see a gay character in an anime or something, they’re typically a horrible stereotype.  This is why Oren is so refreshing.  Yes, there is the recurring gag of unrequited love, but it doesn’t make Kamen Rider Bravo any less of a badass.  This character could have gone in so many “been there, done that” ways we’ve seen with Japanese gay characters, but Oren plays around with those tropes instead, and comes out as a full-fledged hero.  He’s one of the best parts of Kamen Rider Gaim, and propels an already fantastic show to greatness.

Have another LGBT character you’d like to see highlighted?  Let us know in the comments!