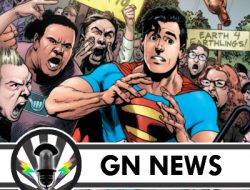 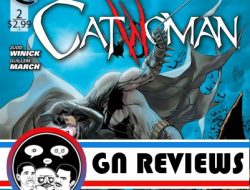 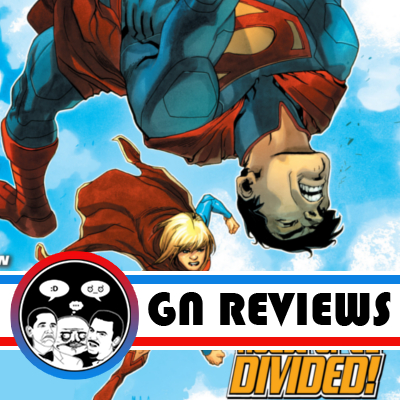 If you haven’t been keeping up with Supergirl, I’ll fill you in. Kara Zor-El crash landed on Earth with no memories of how she got here, no explanation for her powers, and no idea that Krypton has been destroyed. She then fights a bunch of mech-soldiers and runs into Superman, her cousin.

Issue #2 starts with a flashback: Kara is taking care of her baby cousin instead of studying for her finals and is worrying about her graduation. Then, BAM! present day, we see her and Superman talk about who they are, Kara insults his Kryptonese accent, and they proceed to beat the crap out of each other across China. Writers Green and Johnson have stated they are taking their time with the plot, they want to introduce readers to Kara and get us to sympathize with her. Seeing as we were all teenagers it’s not hard to relate to her inner monologue; she’s lost, doesn’t understand what’s happening to her body, and doesn’t trust the only person who can understand her. Green and Johnson are introducing plot elements slowly, the first issue we learn that someone has been keeping tabs on the sky waiting for Kara’s pod to crash in Russia, this issue the villain(?) gets a hold of a red crystal (possibly kryptonite?) from the crash site.

While the villain’s hench-mechas are busy Kara and Superman have a dialogue told through her native Kryptonese and a series of punches. One of the cooler features of this fight is Kara’s powers turning off and on. She see’s Superman’s skeleton with her X-Ray vision as she pummels him and after he throws her to the stratosphere she begins to fly for a few precious seconds before plummeting back to Earth. Superman tries to explain where her powers are coming from but Kara refuses to listen, not trusting that he is who he says he is. The fight ends when Kara accidentally puts several Chinese civilians in danger. Her feeling guilty for putting innocents in danger gives us a glimpse that she is a good person, someone who will make a fine Supergirl someday. She immediately stops pounding on Superman and talks to him, learning from him that Krypton is dead. Another plot element revealed here is Kara’s father’s opposition to General Zod. We further learn from Superman that Krypton had “Worldkillers,” soldiers with great power that may have been linked to Zod’s plans to create “a new kind of soldier.” (Will the New 52 stage another War of the Supermen?) Asrar’s drawings are great, his facial expressions are realistic, and his fight between the two Kryptonians spanning over the Asian country side is cool, seeing Kara punch Superman through seveal sections of the Great Wall is worth checking out. His backgrounds can seem a little sparse but considering they’re in Siberia and rural China it makes sense, it also makes it easier to focus on the Super-cousins.

As stated earlier, Green and Johnson know how to write Kara as a character and you can tell they enjoy getting into her point of view. The slow pacing is also working in their favor, as they let the questions accumulate we’re put in a similar position as Kara: Not entirely sure what’s going on and wondering who is behind her situation. All in all I think this issue is better than the first and the over all story arch being revealed slowly is working like the good season of “Lost.” You know the one I mean.

Do you guys think Supergirl could be one of The New 52’s standout comics? Let us know in the forums!