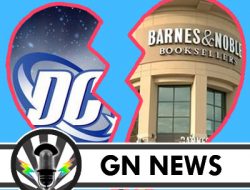 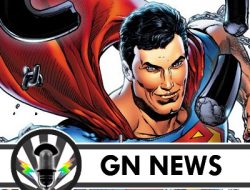 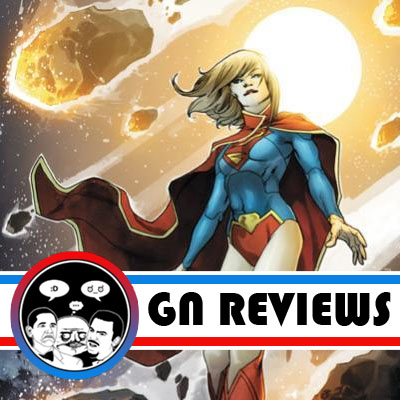 Supergirl, unlike Wonder Woman, is a new origin story. With her varied pasts and the numerous women to bare the title Supergirl brings to mind a multitude of the Maid of Might’s many incarnations, her best though has always been Kara Zor-El, Superman’s cousin and the last daughter of Krypton. There have been five young women who have donned the cape of Superman’s female counterpart: Zara Zor-El, Matrix, Linda Danvers, Cir-El, and then a new Kara Zor-El (The previous Kara was erased from continuity after the first Crisis). The one thing that holds this issue back is that this origin must compete with Jeph Loeb’s Superman/Batman: Supergirl, her reintroduction into the former DC Universe.

Our new Supergirl crashes to Earth (much like her cousin) but instead of ending up in Kansas or the bottom of Gotham Harbor she lands in Siberia. She is immediately assaulted by several mecha-soldiers from an unnamed government agency and quickly fights them off with the aide of the rising, yellow sun and then, after a surprise cameo, the issues ends. The reader does get a good look into her mind but as she mostly asks where she is we’re left with more questions than even she has, though the writers do a great job portraying a Supergirl that is both young and lost.

Writers, Green and Jonhson, give a great glimpse into Supergirl’s amnestic mind and they capture a real “Alice in Wonderland” feeling when Supergirl first emerges from her ship. Mahmud Asrar’s pencils and ink look fine while Dave McCaig’s colors capture both cold Siberia and sunny Kansas well enough.

One thing that does bother me is her costume, some kind of Kryptonian armor, leaves her kneecaps and thighs bare.  I do appreciate that her costume is similar in style to Superman’s armor, it’s a nice touch.

Overall the comic was good. Not great. Not mediocre. Not horrible. The biggest problem this comic has is trying to live up to the legacy of Supergirl’s last origin story. If you had to read only one Supergirl comic I would suggest you read Superman/Batman: Supergirl.

If you haven’t read Superman/Batman: Supergirl go out and buy it now. And read it. And love it. As previously stated Loeb’s story arc reintroduced Kara Zor-El into the old universe in a big way. Superman and Batman find Supergirl in the bottom of Gotham Harbor, Wonder Woman kidnaps her to make sure she doesn’t turn evil, then Darkseid kidnaps her to turn her evil. After a raid that threatens to destroy all of Apokolips and a battle between the two Kryptonians the good guys return home. Darkseid comes to Earth to kill Superman and after Supergirl dives in from of his “Omega Beams” Superman takes him into space and seals the god in the Source Wall. Supergirl is revealed to have survived and Superman then introduces her to the entire superhero community. Epic. The only thing that can rival the expertly told story is Micheal Turner’s artwork. Fun fact: This is the only interior work that Turner has done for a comic company other that Top Cow or Aspen. If that’s not reason enough for you to read it I don’t know what is.

Does this Supergirl’s origin compare with her last dozen or so? Let us know what you think