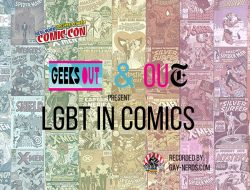 We’ve been trying to avoid talking about it because there’s a lot of misinformation out there and the issue is incredibly divisive but it’s gotten to the point where I feel like we’d be doing everyone a disservice if we didn’t address it at all.

It’s something that’s been simmering for a while and I feel like it’s time to talk about it on GN. If you’re unaware of the controversy, Here is a great podcast

It’s fairly impartial about both sides and it addresses the core issues and the reasons for why both sides are acting why they are. It’s long but It does a really good job of forming parallelisms between that and political campaigns and extremism. It also briefly covers the genesis of the movement and the recent controversies with Intel and the gaming press email lists. It also provides some insight on where to go from here.

I agree wholeheartedly that it’s something that needs to be talked about. These days, it’s so easy to immerse yourself in your own opinion while ignoring dissenting voices. Because of that, it feels like extremists (SJW’s/4chan) are the de facto representative voices on the issue when really, they’re just the loudest and most obnoxious. It just shuts down any conversation on it and there’s this pervasive fear of being labelled one way or the other.

But really, at the end of the day, we just all love games and that’s why everyone is so heated on the issue. It wouldn’t be this big of a consistent shitstorm if no one cared about it.

As for GN’s stance on it, it’s difficult to summarize it especially since #Gamergate encompasses such a broad range of topics so I’m going to TL:DR; it for you instead of ranting about it:

Existence of Corruption in Media: Murky

And that about sums up our stance on it all so far. What do you guys think of everything?